The fact that supporters of Republican presidential front runner Donald Trump have a few screws loose is a widely known fact. However, considering all of the sexist, misogynistic comments that Trump has said to and about women, most of us would imagine that most Trump fans are white males. According to a recent study, Trump isn’t liked by 70% of American women because of his vulgar attitude toward them – and the other 30%? Well, you’re about to see some of them.

CNN’s Martin Savidge had the opportunity to interview a few Arizona conservative women who were fierce Trump supporters, and what the interview revealed is truly depressing and baffling. It turns out, that no matter how disrespectful and degrading Trump is to them, there are still women who will not only continue to support him, but DEFEND him at all costs.

One awful example of this was when Savidge brought up Fox’s Megyn Kelly, whom Trump had brutally attacked on social media and made several sexist remarks about just because she called him out on his misogynistic behavior. One of the women being interviewed said Trump was completely justified in his bullying antics and said that Kelly was guilty of “baiting him.” Another women jumped in and said, “You don’t know what his connotation was!” when Trump’s crude reference to Kelly menstruating was brought up. Basically the group’s justification for supporting Trump despite his attacks on women was:

“Because he insults men as well. I can’t be upset that he insults women.”

The terrifying thing is that this group of women aren’t the ‘uneducated’ voters that Americans and Trump himself believes are supporting him. These are professional, educated women who have chosen to believe in a man who has violated basically everything they believe in.

One of the women, who is actually Mexican-American, said that she appreciated Trump’s ‘transparency.’ She said:

“I just find that what you see is what you get with this man. And that is what I want.”

Another women, a church leader, said that she enjoyed that Trump was ‘a strong man with a strong personality.’ Although, it’s hard to believe that she’s even been watching the election when she says:

“He really does love his country, loves people, he really has respect for women.”

The women also blamed Trump’s rival, Senator Ted Cruz, for the nasty attacks that the candidates have made on each other’s wives. Yes, these women excused this classy tweet from Trump: 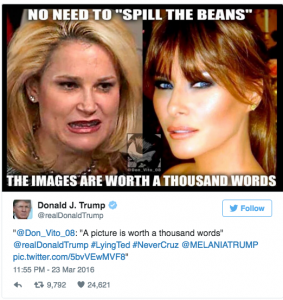 One of the women – perhaps the only one with a little bit of common sense – admitted that she has “cringed on occasion when he’s said a certain thing”. She said:

“I wonder why (Trump has) said a certain thing, but that’s his personality. He’s just — he just lets it roll.”

According to one of the women, only Trump “going back on his policies and on the issues” could stop her from supporting him – which is hilarious, considering that Trump is infamous for flip-flopping . Another woman said:

“It’s his policies that we admire. And that’s really the crux of it and has nothing to do with what he might call somebody or what kind of terminology he uses.”