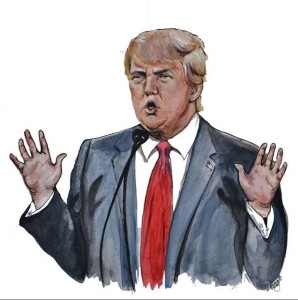 As it begins to look more and more likely that Donald Trump will be the Republican presidential nominee, more people are offering their opinions on the matter. From Trump-loving celebrities like Scott Baio to anti-Trump Republicans like Congressman Carlos Curbelo, nobody is neutral on The Donald.

Now a Philadelphia craft brewery has announced that they will be releasing a series of beers as a protest against Trump. Dock Street Brewing Company introduced their new “Friends Don’t Let Friends Vote Drumpf” beer line last week. (“Drumpf” was the original German name of Trump’s grandfather, before he came to America and Anglicized it as “Trump.”)

Is it just us, or does this particular celebridential candidate always sound like he’s had a few too many? In his (dis)honor, Dock Street Brewery is brewing up a series of quaffable reminders to exercise your suffrage, and just dump Drumpf.

The press release goes on to talk about how important beer has been to “revolutionary ideas” before launching into a critique of Trump that pulls no punches.

We just can’t wrap our well-coiffed heads around a candidate who encourages his supporters to attack protesters at his rallies, wants to limit access to the U.S. based on religion, and flagrantly manipulates facts and data. Oh yeah, and that ridiculous wall idea? Come on.

Accompanying the press release is this drawing (TOP) of Trump, produced for the brewery by Philly artist Alexis Anne Grant. Note the size of the hands.

The brewery has not yet announced a release date for the first beer in the line, but they have shared a bit of information about it. That brew will be called “Short Fingered Stout,” which Dock Street describes this way:

A bitter and delusional stout with an airy, light-colored head atop a so-so body.

Although it sounds potent, drinkers are advised that the beer’s “bark is worse than its bite” and contains a “conservative” 4.5 percent alcohol.

Dock Street is making it easy to drink to your hatred of Trump — just don’t imbibe too early on election day and forget to go vote against him.