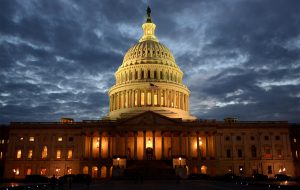 To understand how Donald Trump’s comments and alleged mistreatment of women are stoking the anxiety of other Republicans, look no further than the private appeal sent Wednesday to a billionaire from a super PAC backing Pennsylvania Sen. Pat Toomey.

Without a last-minute infusion of money, Republicans could lose the Senate, the Prosperity for Pennsylvania PAC wrote to Joe Ricketts, the founder of TD Ameritrade, whose family owns the Chicago Cubs and who last month pledged at least $1 million to Trump’s presidential campaign after initially bankrolling his primary opponents.

“There are real concerns moving forward,” read the memo sent to Ricketts by Joshua Novotney, a PAC representative. “Trump has taken a real hit this week and that could have an effect on down ballot races.” Novotney inadvertently copied a reporter on the email.

To maintain Senate control, Republicans can likely afford to lose no more than three of the seats they hold in the six or seven races considered toss-ups, including Toomey’s. Polls have indicated a tight race between Toomey and Democratic challenger Katie McGinty, with the FiveThirtyEight website showing McGinty up by less than one percentage point.

“We need to keep spending parity with the Dems and focus on negative ads to give Sen. Toomey the victory,” Novotney wrote to Ricketts’ aides. “This is a very winnable race even with the presidential polls currently showing Trump down. Our internal poll that had Pat tied showed Trump down 10.”

In Pennsylvania, where the last polls show Hillary Clinton with a solid lead, Toomey has remained on the fence about endorsing Trump, recently saying: “I had hoped that Donald Trump would persuade me to be an enthusiastic supporter, that had been what I’d hoped…But at this point, I remain unpersuaded.”

Some big Republican donors yesterday called on the party to cut its ties to the presidential nominee given the revelations about his behavior around women. House Speaker Paul Ryan has said he will focus on maintaining his GOP majority and no longer will campaign for Trump.

All that would seem to give congressional candidates an opportunity to seek donations that would otherwise have gone to the top of the ticket. Novotney, in an interview, said that wasn’t the intention of the Pennsylvania PAC’s note to Ricketts. The super PAC, he said, is not trying to use Trump’s drop in the polls to rally donors.

“That’s no strategy of ours,” he said. “We reach out to people who are known large donors to Republicans.”

The PAC has spent more than $1.25 million against Toomey’s challenger, according to the Center for Responsive Politics.

Ricketts didn’t immediately respond to a request for comment about his plans. During the primaries, he supported Trump’s opponent, Wisconsin Gov. Scott Walker. Then, after Ricketts’ wife gave $3 million to an anti-Trump group, Trump took to Twitter claiming the family has “a lot to hide!” The couple eventually gave another $2.5 million to the anti-Trump group. Then, in a surprising turnaround last month, Ricketts pledged $1 million to a pro-Trump super PAC.

Aside from its revelations about the state of the election, Novotney’s email also illustrates the loose rules governing campaign finance. Unlike traditional political action committees, super PACs can accept donations of unlimited size, but are supposed to be independent groups that don’t coordinate spending with the campaign of any candidate. Yet the note claims a special relationship with the Toomey campaign.

“We are the blessed Super PAC by Sen. Toomey,” Novotney wrote. “ I am his former senior aide and finance director, and I am working with his former chief-of-staff, cc’d on this email. We appreciate any consideration and help Mr. Ricketts can give.”

Candidates are legally allowed to encourage donors to give to particular super PACs, and often anoint groups run by former aides – even as the two sides are generally not allowed to coordinate their spending.

Larry Noble, the former top lawyer for the Federal Election Commission, said the arrangement was within the rules.

But “calling a super PAC that is ‘blessed’ by the candidate and run by his former staff ‘independent’ shows how ludicrous the FEC’s current coordination rules are,” said Noble, who is now general counsel at the Campaign Legal Center, a group that advocates for stricter enforcement of campaign finance regulations.

Novotney ended his email with a personal touch: “On a side note, I am a big fan of Mr. Ricketts since the family bought the Cubs. My grandfather was a catcher for the Cubs in ’49. Always been my team.”