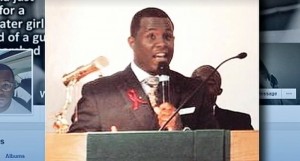 Until his arrest on April 5, Willie Lee Bell Jr. was the children’s pastor at First United Methodist Church of North Texas, located in Cedar Hill, a suburb of Dallas.

Pastor Bell got his ass kicked by a group of concerned citizens who caught him in the act of molesting a six-year-old boy behind an apartment complex in Dallas.

Police later connected Bell to at least two other child molestations at a different apartment complex in Dallas.

Unlike many child predators, Bell didn’t know his victims at all. It appears that he approached them as they were playing outside, and then lured them to a secluded area where he carried out the molestation.

It’s believed that Bell preyed specifically on children who were not associated with his church, and therefore would not be able to identify him to police.

The mother of the six-year-old Bell was in the process of molesting says she’s grateful that the bystanders intervened when they did. “If it wasn’t for them, he probably would have done more to my child,” she told Fox News 4 in Dallas.

While leaders of the First United Methodist Church say they’re not aware of any abuse that took place in the church, the question of how Bell was allowed to become a youth pastor has yet to be answered.

According to police, Bell was previously accused of showing pornographic videos to children in the state of Tennessee. Had the church done a background check, that information would have been readily available.

According to school officials, the child sexual predator also tried to establish himself as a mentor at Bray Elementary School.

School officials sent out letters to parents after news of Bell’s arrest first broke. The letter said that Bell had met with school officials to discuss setting up a mentorship program there. The program never happened, but school officials alerted parents to the fact that he had been inside the school, during regular school hours, when their young children also would have been in attendance.

While schools are required to screen all volunteers and employees during the interview process, the law doesn’t require every person who enters onto school property to have a background check first.

Worse, background checks for church workers and volunteers are not required under the law. Churches are left to determine for themselves whether it’s necessary to screen people who will be allowed to interact with children.

Bell is currently charged with two counts of criminal sexual assault of a child. Given the circumstances, it’s very likely more victims will be identified and more charges will be filed.