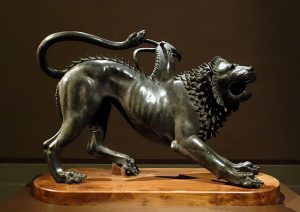 The Chimera of Arezzo is one of the best known pieces of Etruscan sculpture to survive from antiquity. Discovered near the Porta San Lorentino of Arezzo, Italy (ancient Arretium) in 1553, the statue was added to the collection of Cosimo I de’ Medici, Grand Duke of Tuscany in the sixteenth century and is currently housed in the Museo Archeologico Nazionale in Florence. 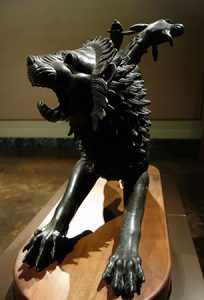 When the statue was discovered along with a collection of small bronzes, it was cleaned by Cosimo I and the artist Benvenuto Cellini; it was then displayed as part of the duke’s collection in the Palazzo Vecchio in Florence. Giorgio Vasari (16th century artist, writer, and historian), studied the statue and declared it a bona fide antiquity.

What is a chimera? 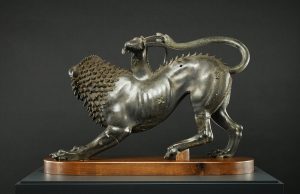 The Chimera was a legendary, fire-breathing monster of Greek myth that hailed from Lycia (southwestern Asia Minor). The offspring of Typhon and Echidna, the Chimera ravaged the lands of Lycia until Bellerophon, a hero from Corinth, mounted on the winged horse Pegasus was able to slay it (Hesiod Theogony319-25). Typically the Chimera is a hybrid—often shown with elements from more than one animal incorporated into the whole; most often these include a lion’s head, with a goat rising from its back, and a snaky tail. 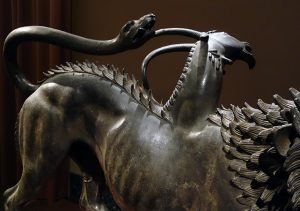 The Chimera of Arezzo presents a complex composition that seems conceived for viewing in the round. The contortions of the fire-breathing beast, obviously wounded in combat, evoke emotion and interest from the viewer. Its writhing body parts invite contemplation of the movement, pose, and musculature of the figure. While the tail was restored post-discovery, enough of the original composition confirms this dynamism. The lean body also emphasizes the tension in the arched back, the extended claws, and the roaring mouth set amidst the bristling mane. 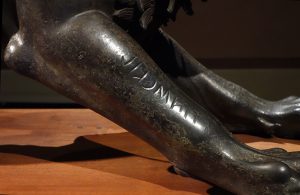 The right foreleg (above) bears a dedicatory inscription in the Etruscan language. The inscription reads, “tinścvil” meaning “Offering belonging to Tinia” (TLE 663; Bonfante and Bonfante 2002, no. 26 p. 147). This indicates that the statue was a votive object, offered as a gift to the sky god Tinia. 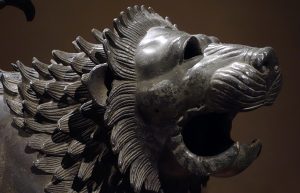 The Chimera of Arezzo is a masterwork of Etruscan bronze working, demonstrating not only a high level of technical proficiency on the part of the artist (or workshop) that produced it but also clearly showing a fine-tuned awareness of the themes of Greek mythology that circulated around the Mediterranean. A. Maggiani discusses the wider Italiote context in which the statue was likely produced—pointing out iconographic comparisons from sites in Magna Graecia such as Metaponto and Kaulonia (Italiote refers to pre-Roman Greek speaking peoples of southern Italy, while Magna Graecia refer to the Greek colonies established in Southern Italy from the 8th century B.C.E. onward).

These iconographic trends, indicative of increasing Attic (derived from the area around Athens, Greece) influence, suggests that the Chimera of Arrezo was produced by Italiote craftsmen who were influenced by the spread of Attic trends in art in the last years of the fifth century continuing through to the early fourth century B.C.E. The dedication of the statue as a votive offering to Tinia further reminds us of the wealth and sophistication of Etruscan elites who, in this case, could not only afford to commission the statue but could also afford to part with it in what may have been an ostentatious fashion.

“Chimera in Bronzo,” from the Ministero per i beni Culturali e Ambientali Soprintendenza Archeologica della Toscana Sezione Didattica (in Italian)