Almost half a million years ago a huge flood started breaking the apart the land bridge that joined England and France. 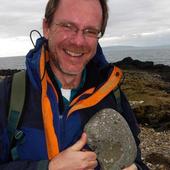 As Brexit looms, Earth scientists have uncovered evidence of Britain’s original split from mainland Europe. Almost half a million years ago, according to new data, water suddenly started cascading over the narrow strip of land that joined England and France – putting pressure on a chalk bridge.

Researchers show that, as a result, this ridge – a natural dam that separated the North Sea from the English Channel – was catastrophically ruptured hundreds of thousands of years later in a two-stage process, ultimately setting Britain’s insular environment in stone. Their results are reported in Nature Communications.

So where did all the water that caused this geological disaster come from? The scientists, from UK, Belgium and France, base their conclusions on a line of deep plunge pools (basins excavated by intense waterfalls) and a network of channels cut in the sea floor south-west of the ridge line. They deduce that these were first formed some 450,000 years ago as a lake of glacial melt water to the north-east in the North Sea basin (the depression where the north sea sits today, some of which was dry land back then) spilled over into what is today the English Channel. 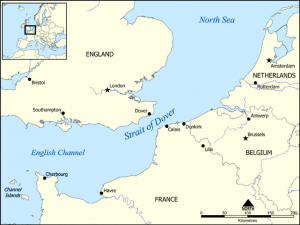 However, exactly why the glacial lake suddenly spilt over remains unknown. One possibility is that part of its ice sheet broke off, causing a surge that prompted the water to flow over. The 33km long land bridge at Dover Strait formed part of an icy landscape at the time. According to the researchers, it looked “more like the frozen tundra in Siberia than the green environment we know today”. 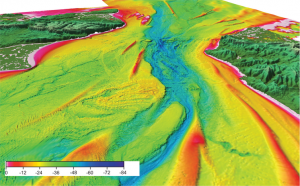 The loose gravel that fills the seafloor plunge pools was first noticed 50 years ago. Indeed, the channel tunnel had to be rerouted to avoid them during its construction. There has long been speculation that they were associated with the remains of the land bridge that formed an ancient route between UK and Europe – and now we finally have some evidence to back this up.

The plunge pools themselves are huge, drilling down some 100 metres into the solid bedrock and measuring several kilometres across. The waterfalls that formed them are estimated to have been 100 metres high, as we know the land bridge stood high above the surrounding landscape.

It seems Dover Strait may have gone through two breaches. The first one, about 450,000 years ago, was rather modest and formed a smaller channel than the one we see today. But the authors suggest that a second, more catastrophic breach subsequently occurred – possibly hundreds of thousands of year later, irrevocably separating Britain from Europe. 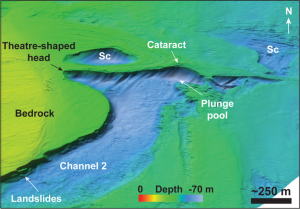 3D view of an ancient large waterfall in a valley in the central part of Dover Strait. A plunge pool lies at its base. Imperial College London/Professor Sanjeev Gupta and Dr Jenny Collier

This final collapse of the land bridge is marked out by a larger seafloor channel named the Lobourg Channel, which cuts through the earlier structures. This appears to have been carved by a major cataclysmic flood from the North Sea into the English Channel. The timings of the two-stage erosion, including the final destruction of the connecting bridge, are uncertain, but mollusc shells found either side of the breach indicate that it was complete at least 100,000 years ago.

The latest observations are the result of a broad marine geophysics campaign to tackle the problem. Ship-based seismic surveys of the floor of the English Channel have been combined with a type of sonar to provide an astoundingly detailed picture of the sea floor and its sub-surface. Uncertainty remains over the exact timings of each of the events, and researchers have set their sights on drilling into the sea floor to retrieve samples from the plunge pool sediments to determine their precise ages.

The erosion of the land bridge hundreds of thousands of years ago set Britain on its path to becoming an island nation. Subsequent changes in sea level at the end of that ancient ice age further confirmed its insularity, and Britain’s connection to mainland Europe was lost.