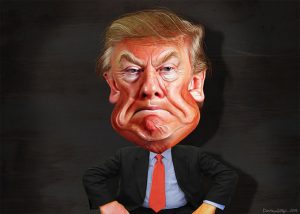 Republican presidential nominee Donald Trump is in full implosion mode. Ever since a lewd, misogynistic tape of him on an Access Hollywood bus with then-host Billy Bush surfaced on Friday, GOP establishment has been fleeing the Trump Train in an effort to save their own skins in down-ballot races. However, the party leaders — namely House Speaker Paul Ryan — were largely still supportive, even while condemning Trump’s indefensible remarks.

Well, that all changed on Monday, when Ryan told members of the House Republicans that he would no longer defend nor campaign for his party’s toxic nominee, and told down-ballot candidates to do what they have to do to save their own seats in their districts. Trump, never one to be able to let things go when he feels slighted in any way, for any reason, has decided to go into full-blown war mode against his own party’s establishment. Trump took to Twitter to blast them all, and it is still happening as we speak. Here’s his big “f**k you” to Paul Ryan and all the rest:

Despite winning the second debate in a landslide (every poll), it is hard to do well when Paul Ryan and others give zero support!

Our very weak and ineffective leader, Paul Ryan, had a bad conference call where his members went wild at his disloyalty.

It is so nice that the shackles have been taken off me and I can now fight for America the way I want to.

Disloyal R’s are far more difficult than Crooked Hillary. They come at you from all sides. They don’t know how to win – I will teach them!

And there you have it, folks. The Republican Party has literally nominated a crazy man to be in control of America’s nuclear arsenal. If you ever doubted that the GOP cares more about their party than they do their country, here’s your proof that there is no doubt to be had here. They’d rather nominate a lunatic who would end civilization as they know it than see a Democrat in the White House. They created this monster, and now that they’ve lost control of him, they have not a clue as to what to do about it.