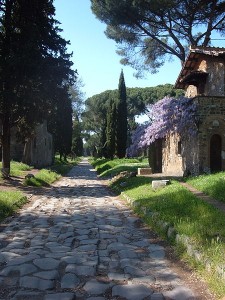 Remains of the Via Appia in Rome, near Quarto Miglio
Image courtesy of Wikimedia Commons

Back in 2007 I saw this nice travel piece about the Via Appia. I had hoped to see the sights listed when I visited Rome in October 2007. I planned to take the relatively new hop-on-hop-off Archaeobus to the park and spend the day exploring the catacombs, the baths of Caracalla, the tomb of Cecilia Metella, and a couple of the churches and museums (if my feet didn’t give out!). I also wanted to try the spit-roasted goat they mentioned was a local specialty!

“A modern-day tour of the Via Appia Antica might start at the end of the Forum, just beyond the Circus Maxentius where charioteers raced seven times around an obelisk cheered by spectators in 10 tiers of stone bleachers. Near here, weary travelers beheld Rome’s golden milepost – where all roads led. Soon the pleasant road, shaded with cypresses and umbrella pines, passes scattered piles of eroded bricks that once were grand mausoleums.

A short distance brings the traveler to the dome-shaped ruins of the ornate tomb of the noblewoman Cecilia Metella. She was the daughter-in-law of Marcus Crassus, who shared the triumvirate with Pompey and Julius Caesar. In Childe Harold’s Pilgrimage, Lord Byron muses whether she died young and fair or old and wise: 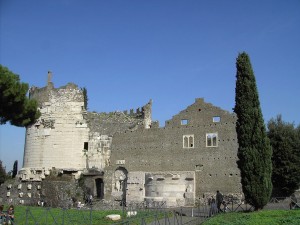 The remains of the tomb of Cecilia Metella along the Appian Way near Rome, Italy.  Image courtesy of
Wikimedia Commons.
“This much alone we know: Metella died, the richest Roman’s wife. Behold his love or pride.”
Pope Urban VIII ripped up the marble floor of her tomb to build the Trevi Fountain.
At Porta San Sebastiano is the landmark Church of Domine Quo Vadis. Here legend says St. Peter, fleeing Nero‘s persecutions after the great fire, saw a vision of Christ heading toward the city. “Lord, where goest Thou?” he asked, and the vision replied, “To Rome to be crucified again.”
Also at Porta San Sebastiano stands the largest and best preserved of the fortified gates in the Aurelian Wall that embraced the seven hills of Rome for more than a thousand years. The twin gate towers house a small museum of wall artifacts. Here you can walk along the top of the wall for postcard views of the Appian Way and the distant Alban Hills. All about are vineyards producing Rome’s refreshing Frascati wine. 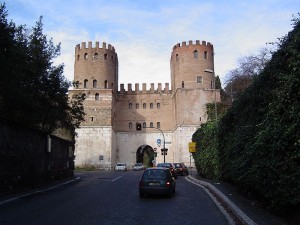 The Porta San Sebastiano, the best preserved of the fortified gates iin the Aurelian Wall that encompassed ancient Rome.
Image courtesy of Wikimedia Commons.
Beyond the narrow ancient gate, the road dips slightly into a valley covering a maze of catacombs where thousands of bodies were buried along five levels of tunnels. Rome has more than 60 catacombs, some not yet fully explored.
The two most important catacombs open to the public along the Appian Way are St. Sebastian and St. Callixtus, where most of the early popes and many martyrs were buried. Walls and ceilings have paintings and frescoes of early Christian symbols like the fish, the dove and the anchor, and scenes from Scripture such as Jonah swallowed by the whale, Daniel in the lions’ den, the raising of Lazarus and, most often, the Good Shepherd. 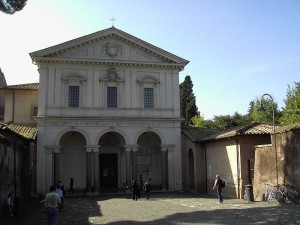 APPIAN WAY REGIONAL PARK: Web site offers information on tours of the Appian Way; how to get there by public transportation, bike or on foot; opening times for monuments and museums, and other information. Visitor center is located at Via Appia Antica 42 (open Monday-Friday, 9:30 a.m.-1 p.m., 2:30 p.m.-5 p.m.).

Update 3/9/2015: As it turns out, I was injured in Naples in 2007 and had to fly home for surgery rather than travel on to Rome on that trip.  However, I did manage to visit the Via Appia on another trip to Rome in March 2009.  My companion and I chose to try the hop-on hop-off Archaeobus with audio tour as I had originally planned.  However, I’m afraid, after experiencing that jarring, noisy ride, I do not recommend that mode of transportation.  The bus driver drove so fast you couldn’t possibly get any good pictures of any of the sites along the way and there was so much noise that you couldn’t hear what was being said using the earphones either. After lurching past the Aurelian Walls and flying past the tomb of Cecilia Metella, we decided to get off at the Basilica alle catacombe di San Sebastiano.

My companion had seen catacombs before so she decided to enjoy the spring sunshine and parked herself on a bench to wait for me to go on the tour.  These catacombs were once an area of pazzolan mines.  Pozzolan is a mixture of minerals used in the production of concrete.  Then, in the 2nd century CE, the mines were abandoned and the caverns converted into a pagan burial ground.  By the late 3rd century CE, Christians began burying their dead in these chambers as well and continued to do so until the mid-4th century CE.

A fifth century source states Sebastian was a soldier from Narbonne, in Gaul (modern-day France), born of a family from Milan who died in Rome under the persecutions of the emperor Diocletian. His relics were kept in the catacombs until the 9th century when they were moved within the town walls. They are now back in the Basilica standing above the catacombs.

Quirinus was a bishop of Sescia, in Pannonia, whose relics were moved to Rome by pilgrims from that region between 4th and 5th century CE.

Nothing is known about Eutychius but his grave was discovered during excavations carried out in the 20th century in a deteriorated area of the catacombs.   A poem dedicated to him, by Pope Damasus I, is now displayed at the entry of the basilica.

In 258 CE, during the Valerian persecutions, the catacombs were temporarily used as a burial site for the apostles Peter and Paul and the basilica was dubbed the Basilica Apostolorum.  But their remains were later removed to their own respective basilicas in Rome.

I was really disappointed that they would not permit even non-flash photography within the catacombs. But I found the tour very interesting, nonetheless. (The photography ban may have been lifted as I found the image below of the interior of the San Sebastiano catacombs up on Wikimedia Commons). 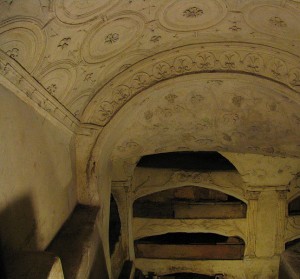 Floral stucco reliefs on the ceilings of the catacombs of San Sebastiano outside
of Rome, Italy.  Image courtesy of Wikimedia Commons.
I saw the symbolic fish etched into the walls as we wound our way down through stuccoed and frescoed chambers until we were three levels below the entrance.  (Originally there were four levels but one level was destroyed during subsequent rebuilding efforts). We finally came upon some of the earliest Roman tombs clustered together in a round chamber known as the piazzola (initially pagan these tombs were later reused by the Christians).  These mausolea had architectural elements on their facades that, together, made them look like a small ancient city to me. 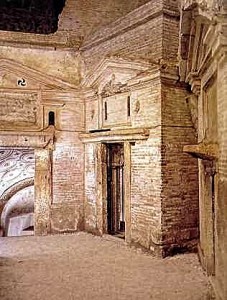 2nd century CE Mausolea in the heart of the catacombs of
San Sebastiano.  Image courtesy of mistretta.eu then
digitally enhanced by Mary Harrsch.

“The first one on the right is externally decorated with paintings (funeral banquets and the exorcism of the Gerasene demoniac) and still bears an inscription with the name of the owner, Marcus Clodius Hermes; the interior houses graves and pictures and shows a vault decorated with the head of a gorgon.

The second one, called Mausoleum of Innocentiores referring to the funeral college to which it belonged, has a vault decorated with refined stuccoes; some recesses show inscriptions with Greek characters but written in Latin, as well as a graffito with the initials of the Greek words meaning “Jesus Christ Son of God Savior” (Ichtys).

On the left there is the Mausoleum of the Adze, from the tool depicted on the exterior, whose decoration consists of shoots of vine sprouting from kantharoi placed on false pillars.” – Wikipedia

We continued our tour and emerged into a feasting chamber called the “Triclia” where funerary feasts were celebrated, not only immediately after an interment but periodically thereafter by family members.  Here, the plastered walls were covered with over 600 pieces of graffito left by visitors across the centuries and we were left to examine them before heading to the passageway that connected the catacombs to the basilica above. 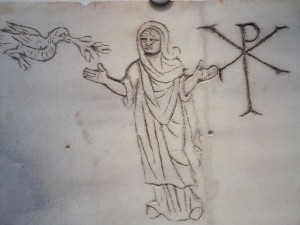 Even though I couldn’t take pictures inside the catacombs at San Sebastiano, I photographed this etching of a Christ figure, Chi-Roh symbol and dove that was recovered from the catacombs that I found at the Baths of Diocletian venue of the Museo Nazionale Romano in Rome.  Photo by Mary Harrsch © 2009.
The Basilica of San Sebastiano fuori le mura (San Sebastiano outside the walls) was originally built by Constantine in the 4th century.  Many of the catacomb passageways and even the piazzola were filled into to form a base for this structure. (These areas were re-excavated in the late 19th and early 20th centuries) In 826 CE, the remains of Saint Sebastian were moved to St. Peter’s for safekeeping when the Saracens threatened Rome.  The basilica was subsequently destroyed by the Saracens but rebuilt by Pope Nicholas I (858-867).  Then the martyr’s altar was reconsecrated by Pope Honorius III (1216-1227) in the 13th century.  The current edifice was commissioned in 1609 by Cardinal Scipione Borghese who selected first Flaminio Ponzio to reconstruct it and, after Ponzio’s death in 1613, entrusted its completion to Giovanni Vasanzio.
I found some marvelous sculptures in the Basilica including this wonderful putto that looks very much like the work of Gian Lorenzo Bernini who sculpted similar figures I have seen at the Basilica of Saint Peter’s in Vatican City: 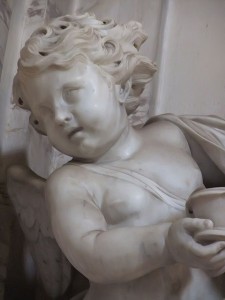 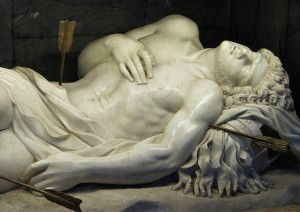 Somehow I missed this moving sculpture of Saint Sebastian also said to be in one of the knaves of the basilica.

I found this video on YouTube about the catacombs of San Sebastiano.  It doesn’t have many images of the catacombs either but does have some marvelous views of the basilica and its ornate ceiling: