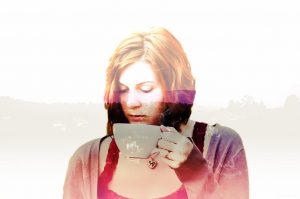 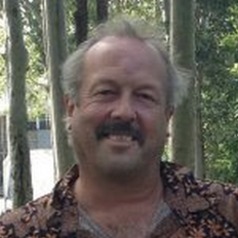 Most of what we taste we actually smell. The only sensations that we pick up in our mouth are sweet, sour, bitter, umami and salty. Without its smell, coffee would have only a sour or bitter taste due to the organic acids. Try it with your next cup of coffee – hold your nose as you take your first sip.

The rich satisfying sensation of coffee is almost entirely due to the volatile compounds produced when we roast coffee beans.

The compounds that are formed in the roasting process are very similar to any other compound that is formed in the cooking process. The smell of baking bread is from compounds produced when a sugar reacts with a protein in what is called a Maillard reaction.

Not every scent is as welcoming as freshly baked bread, though. Our sense of smell has developed over millennia to detect dangerous compounds. 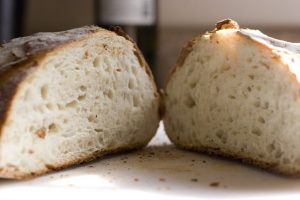 Coffee has some of the same ‘scent’ compounds as freshly baked bread. jm_photos/flickr, CC BY

The upshot of this is that we do not detect all compounds in our surroundings to the same extent. For example, to us water is completely odourless although it may be very concentrated in the atmosphere.

Odour chemists have developed a system called odour activity values which show how we respond to particular compounds. This has an influence on how we experience a complex mixture of stimuli.

Flavourists and perfumists have developed a series of descriptors, or words that are used to describe a particular smell. Using gas chromatography equipped with a sniffer port, chemists are able to smell individual compounds as they come off the gas chromatography column and apply a description to what they experience.

Words such as fruity, earthy, flowery, caramel-like, spicy and meaty are used to describe the odour of individual compounds. It is this complex mixture of volatile organic compounds that we can identify with a particular food. The smell of baking bread can easily be distinguished from the smell of cooking cabbage; a lamb roast from a pork roast.

Yet it is not one compound that is responsible for the odour that we experience, but a complex mixture of hundreds of different compounds.

What we smell in coffee

Approximately 800 different compounds are produced in the coffee-roasting process. These thermal degradation reactions decompose sugars and proteins to form the volatile compounds that we smell.

Most of these reactions take place within the thick walls of coffee bean cells, which act as tiny pressure chambers. Not all of these 800 compounds cause the same response in the olfactory membrane in your nose, though. 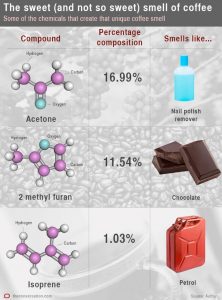 Green (unroasted) coffee tastes very grassy when brewed. You still get the organic acids and caffeine in the brew but it lacks the full sensation because there are few volatile compounds due to the lack of roasting.

The profile of roast coffee includes only 20 major compounds, but it is the influences of some of the minor compounds that determine the overall taste that we experience.

When chemists are analysing the volatile compounds in coffee a huge range of different odour qualities are experienced.

Some of the nitrogen-containing compounds such as pyridine can actually smell quite foul, while others can smell quite fruity.

Other compounds have descriptors such as putrid or rancid. One compound, 5- methyl furfural, is described only as coffee-like. But it is the rich mixture of hundreds of different volatile compounds that, when we smell it, can only be described as “coffee”.