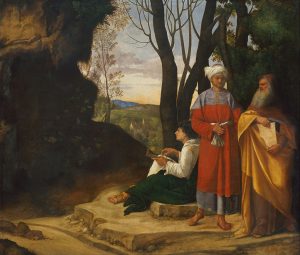 If you were asked to name the most important philosopher of 10th-century Baghdad, you would presumably not hesitate to say ‘al-Farabi’. He’s one of the few thinkers of the Islamic world known to non-specialists, deservedly so given his ambitious reworking of Platonic and Aristotelian metaphysics and political philosophy. But if you were yourself a resident of 10th-century Baghdad, you might more likely think of Yahya ibn ‘Adi. He is hardly a household name now, but was mentioned by the historian al-Mas‘udi as the only significant teacher of Aristotelian philosophy in his day. But ibn ‘Adi is not just a good example of how fame wanes across the centuries. He is also a fine illustration of the inter-religious nature of philosophy in the Islamic world.

Ibn ‘Adi was a Christian, as were most of the members of the group of philosophers who wrote commentaries on Aristotle at this time in Baghdad. The Muslim al-Farabi, who was apparently ibn ‘Adi’s teacher, was an exception to the rule. Completing the ecumenical picture, ibn ‘Adi was involved in an exchange of letters with a Jewish scholar named Ibn Abi Sa‘id al-Mawsili, who wrote to him with questions about Aristotle’s philosophy that he was hoping to have cleared up. Admittedly, Baghdad was an exceptional place, the capital of empire and thus a melting pot that drew scholars from all over the Islamic world. But philosophy was an interfaith phenomenon in other times and places too. The best example is surely Islamic Spain, celebrated for its culture of convivencia (‘living together’). Two of the greatest medieval thinkers, the Muslim Averroes and the Jew Maimonides, were rough contemporaries who both hailed from al-Andalus. After Toledo fell into the hands of the Christians, the Jew Avendauth collaborated with the Christian Gundisalvi to translate a work by the Muslim thinker Avicenna from Arabic into Latin.

That last example is a revealing one. Philosophy in these times often involved representatives of different faiths because it often presupposed translation. Hardly any philosophers of the Islamic world could read Greek, not even Averroes, the greatest commentator on Aristotle. He and other Muslim enthusiasts for Hellenic wisdom had to rely on translations, which had mostly been executed by Christians in the 8th to 10th centuries. Knowledge of Greek had been maintained by Christian scholars in Byzantine Syria, which explains why Muslim patrons turned to Christians to render works by Aristotle, Ptolemy, Galen and many other ancient thinkers into Arabic. Thus the very existence of Hellenic-inspired philosophy in the Islamic world was a manifestation of inter-religious cooperation. 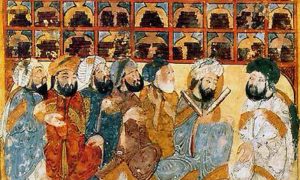 Scholars in a library from the Maqama of Hariri manuscript. / Bibliotheque Nationale

All of which is not to say that the Islamic world was free of inter-religious dispute. On the contrary, it seems that one reason those Muslim patrons were interested in Aristotle was that his logic would give them the tools to keep up with Christian opponents in theological debate. A vivid example is provided by al-Kindi, the first Muslim thinker to draw on Hellenic sources. He wrote a short refutation of the Trinity in which he used Greek logic to argue that God must be wholly one, not one and three – mentioning that Christian readers should be able to follow the argument, given their familiarity with logical concepts. A nice twist to the story is that we know of this refutation only thanks to the aforementioned ibn ‘Adi, who quoted al-Kindi in order then to rebut his attack on the Christian dogma.

While men such as al-Kindi were appropriating Greek ideas to defend Islam and attack Christianity, others disapproved of the importation of these same ideas into Muslim culture: al-Kindi responded to unnamed critics who deplored the use of pagan philosophy, and the founder of the Christian Baghdad school got into a public dispute with a Muslim grammarian over the usefulness of Aristotle’s logic. The grammarian mocked the pretensions of the Christian Aristotelians, and delighted in pointing out that all this logic had not prevented them from believing that God can somehow be both one and three.

Still, it remains the case that philosophy and the sciences more generally offered a kind of meeting point or neutral ground for intellectuals of different faiths. Muslims, Christians and Jews who shared an interest in Aristotle’s metaphysics or the medical theories of Galen read each others’ commentaries and elaborations on the Hellenic tradition. This is shown even by the disputes that they had with one another: using Greek logic to debate the Trinity implicitly suggested that this was a topic that could be resolved by appeal to reason. And many of the thinkers mentioned above argued that philosophy offered the best resource for the interpretation of sacred texts, whether the Torah, the Christian Bible, or the Quran. So it is no coincidence that in the Muslim al-Kindi, the Christian ibn ‘Adi, and the Jew Maimonides, the One God of Abrahamic tradition bears a striking resemblance to the god of Aristotle’s Metaphysics. Their shared enterprise as elite philosophers meant that they had more in common with one another than they did with most of their co-religionists.