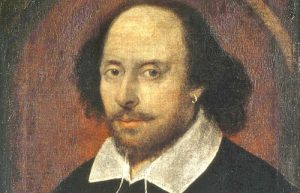 “Sweet Moon,” William Shakespeare wrote in A Midsummer Night’s Dream, “I thank thee for thy sunny beams; I thank thee, Moon, for shining now so bright.”

I wonder if Shakespeare ever envisioned worlds with many moons, such as the 27 moons of Uranus, many of which bear the names of Shakespearean characters. Each of these moons is its own little world, from the messy fractures of Miranda – pulled and twisted by Uranus and its companion moons – to the ancient and dark moon Umbriel. But it is right and good to pay homage to Shakespeare with these points of light in the night sky, to a man who has brought so much light to so many lives, encapsulating the joy, the sorrow, and the very nature of what it is to be human.

In 2011, I sat in the Theater Royal in Haymarket London, having the amazing experience of watching Ralph Fiennes as Prospero in The Tempest. The program noted that the play was first performed in London in 1611 for James I; the thought of that actually distracted my attention from the play for a moment!  For 400 years, people just like me had sat in theaters in this very town, hearing those very same words, laughing at those same lines such as, “We are such stuff as dreams are made of,” “What’s past is prologue,” and so on. I found as much relevance to my life and my modern era as the audience with James I likely found to their lives. The ability to bring all of life into art – and to make it last for centuries – that’s the gift of Shakespeare.

I find in the timeless appeal and relevance of Shakespeare the same thing that I actually love about the study of our Earth, our solar system, and our universe. For billions of years, stars and planets are born, they live, and they die. We came from stardust and we return to it. For the study of geology or stellar evolution or astrobiology is actually just a wonderful, complex, timeless story with depth and drama—just the kind of tale that Shakespeare told so well. I sometimes get frustrated with scientists who just want to tell “just the facts,” leaving out the stories behind the science, burying the message in jargon and method.

I was an art history minor in college, and now I promote science communication at NASA—helping our scientists and engineers bring not just the detail but the ‘why?’ the ‘who cares?’ and the ‘how did we get here?’ We need to bring context to our research: How does this affect my life or my place on this planet? And what is our future? Science not only informs us—it inspires us. The more we learn, the more we crave knowledge and understanding. Science fuels our innate curiosity. As we look to those points of light in the night sky, we yearn to know more—to understand our place in the universe.

When we plan at NASA to send humans to Mars, we do so to answer the fundamental question that humans have long pondered: Are we alone? Could life have evolved on another world and what could that life reveal about the very nature of life itself? When we look to the now thousands of planets we have found around other stars—how many of them are possibly not just habitable, but inhabited worlds?

That is why we need not just STEM – science, technology, engineering and math – we need the humanities. We need Shakespeare, we need the arts, and we need design, to understand our world and beyond. Shakespeare was a master at telling the story of the lives of people on this planet. In science, we try to take apart all that is behind that story – piece by piece – to understand how it works, where it is going, and where we’re going. But we need to approach these difficult challenges using both sides of the brain. We need to use our heads and our hearts.

Great science is about so much more than analyzing data. It’s about dreaming big. It’s about creativity, inspiration, and asking the right questions. It’s about perseverance and courage. It’s about heroes. It’s all the things we appreciate about Shakespeare’s works—powerful storytelling that stands the test of time.

As we work to solve the most pressing questions about our origins and our destiny, we come back to Shakespeare, to share the big story of science with everyone.