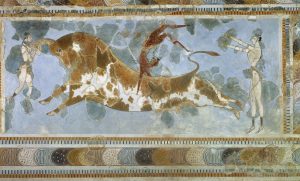 This ancient Greek fresco, known as The Toreador, was found on the Greek island of Crete. The ancient Greeks produced beautiful art and architecture.

The Greeks were proud of the independence and individuality of their city-states.

Many people believe that the greatest of all the civilizations of the ancient world was the civilization of Greece. However, it is a little misleading to speak about ancient Greece as though it were a single civilization.

Ancient Greece was not a unified country. It was a collection of independent city-states. The ancient Greek word for city-state was polis. A typical polis would have included a town or a small city and the farmlands surrounding it. Most Greek city-states had a population of no more than twenty thousand and covered an area of only a hundred or so square miles. By 500 BCE, dozens of these city-states existed, mainly along the shores of the Aegean Sea. Most were located in the area of present-day Greece, but others were scattered along the coast of
Asia Minor, on the shores of the Black Sea, in southern Italy, and in northern Africa.

The Greek city-states had a number of things in common. First, the people of the city-states all spoke Greek, though dialects varied from city-state to city-state. The Greeks referred to non-Greek speakers as “barbarians.” The word comes from another Greek word —bárbaros—meaning to babble. When these people spoke, the Greeks could hear only meaningless syllables that sounded to them like bar, bar, bar. 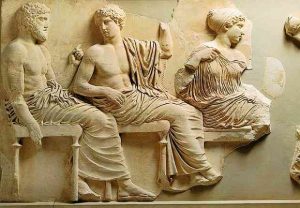 This ancient sculpted wall decoration, called a frieze, can be found on the Parthenon in Athens, Greece. The frieze depicts some of the Assembly of the Gods. From left to right you can see Poseidon, Apollo, and Artemis, the goddess of the hunt. / Acropolis Museum, Athens

The Greek city-states were also unified by religion. The citizens of the various city-states worshiped the same set of Greek gods. Zeus was the chief god, but he shared power with other gods, including his wife Hera, the sun god Apollo, the sea god Poseidon, and the love goddess Aphrodite. The Greeks believed that these gods lived on Mount Olympus but came down from time to time to influence human affairs. They told marvelous stories, or myths, about the adventures and misadventures of their gods. They built temples to honor their gods.

Greek city-states also came together for athletic competitions like the Olympic Games. But each Greek city-state was also unique. Each had its own traditions, legends, and local heroes. Almost all city-states worshiped a handful of local gods along with the central gods.

Each city-state also had its own distinctive form of government. In fact, the Greeks were so innovative, or groundbreaking, when it came to government and politics that many of the words we use to talk about these subjects today can be traced back to ancient Greek words. Our words politics and police officer are both derived from the word polis. Politics is the art of governing a polis, or state, and a police officer is a person who helps preserve order in the state.

In the beginning, most Greek city-states were ruled by kings. However, by 500 BCE, most city-states had adopted other forms of government, including tyranny, aristocracy, oligarchy, and democracy. 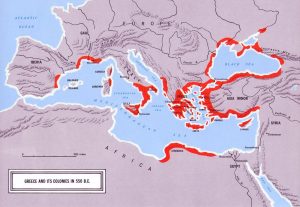 The Greeks established colonies throughout the Mediterranean. This map shows the extent of ancient Greece around 500 BCE.

Tyranny was a system in which one man was the dictator—someone who held all the power. For Greeks, tyranny was different from monarchy: tyrants seized power illegally, whereas kings
inherited the throne legally. Some tyrants were popular because they opposed the rich and helped the poor. However, few Greeks wanted to live under tyrants all the time.

Aristocracy was a system in which a few noble, or upper-class, families held power. The word
aristocracy actually means rule of the best. Sometimes these “best” families shared power with
an assembly made up of citizens, but not always.

An oligarchy was similar to aristocracy. Again, the power was held by only a few people. In fact,
oligarchy means rule of the few. But in this case, the few were not only noble families but also wealthy men. (Often oligarchies were comprised of aristocratic and wealthy nonaristocratic families.)

Finally, there was democracy. In a democracy, power was shared by a large number of male citizens. Citizens took part in debates, decided government policy, and elected officials. The Greeks seem to have been the first people to experiment with this kind of government. The experiment eventually caught on, and democracy became the pattern of government in a number of Greek city-states.

The Greeks were proud of the independence and individuality of their city-states. They thought it was better to live under local government than under the power of a king who lived far away. However, there were also disadvantages to the city-state model. The Greek city-states were frequently getting into disagreements and wars. This lack of unity made it easier for foreign countries to invade Greece. In times of crisis, the city-states might join together to fight a common enemy, but this was the exception, not the rule. In general, the alliances among city-states tended to be short-lived, while the rivalries among them tended to be long-lasting.

One of the greatest rivalries was between Athens and Sparta, two of the largest and most powerful city-states.

Originally published by the Core Knowledge Foundation under the terms of a Creative Commons Attribution-NonCommercial-ShareAlike 4.0 International license.