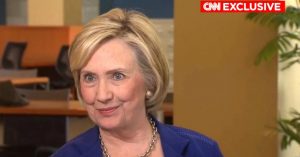 Hillary Clinton told CNN’s Chris Cuomo on Thursday that she believes the nomination has already been decided. “I will be the nominee for my party,” Clinton said. “That is already done, in effect. There is no way that I won’t be.” (Photo: Screenshot/CNN)

“We are in till the last ballot is cast,” says Sanders. “There is no way that I won’t be [nominated],” says Clinton.

Bernie Sanders has reiterated his promise to stay in the presidential race until the Democratic convention in July, and is throwing his weight behind a number of progressive initiatives in California as the state’s primary approaches there on June 7.

As rival Hillary Clinton told CNN’s Chris Cuomo on Thursday afternoon the nomination was “already” hers, Sanders refuses to discount California voters—more than 1.5 million of whom have registered to vote since January.

“I will be the nominee for my party, Chris. That is already done, in effect,” Clinton said. “There is no way that I won’t be.”

In contrast, during a rally in the city of Carson on Tuesday, Sanders told the more than 10,000 people in attendance, “This is, in a sense, the beginning of the final push to win California. There are a lot of people out there, many pundits and politicians, they say Bernie Sanders should drop out, the people of California should not have the right to determine who the next president will be. Well, let me be as clear as I can be…. We are in till the last ballot is cast!”

The Vermont senator followed that up by endorsing a ballot measure to legalize recreational marijuana in the state, telling the rally, “I do not live in California. But if I lived in California, I would vote ‘yes’ to legalize marijuana.” He also previously endorsed a state initiative to combat soaring drug prices.

California will be the last state to cast ballots in the primaries—Washington, D.C. will hold the final vote on June 14—and has the largest amount of pledged delegates at stake with 475 up for grabs.

As International Business Times calculates it, Sanders has an uphill climb ahead of him:

FiveThirtyEight has Clinton with a 94 percent chance of winning the state, but there are parts of California, with many young people, that could benefit Sanders. Still, winning the state would require an enormous organizing effort, and the Vermont senator’s top aide in California recently left the campaign. The state is also very diverse, and Clinton has continued to do better among Latino and black voters.

California also uses a semi-closed primary system, which is not in Sanders’ favor. However, California residents appear to be excited about the upcoming primary, with new statistics showing more than 1.5 million voters either re-registering or signing up for the first time since January 1. That number is expected to surpass 2 million by the registration deadline, which is May 23.

“Sen. Sanders’ message of income inequality and corrupt campaign finance are resonating so strongly with the people of California they are registering to vote in record numbers,” campaign manager Jeff Weaver said Wednesday. “If this is any indication of voter excitement and turnout, Bernie has a strong chance of winning in California.”

What may help even more is if Clinton keeps her promise of debating with Sanders in California ahead of the primary. The two campaigns agreed in January to schedule a debate there this month, but Weaver pointed out that Clinton’s side has yet to follow through.

“More than half way through the month of May, we hope Secretary Clinton will soon make good on her campaign’s commitment and agree to a time and place for a debate,” he said. “There are issues of enormous importance facing the people of California and our nation and the people of our largest state deserve to hear the Democratic candidates opinions.”

At any rate, Sanders’ campaign is pushing forward against the odds, and his senior strategist told the New York Times that their only focus is on “what happens between now and June 14.”