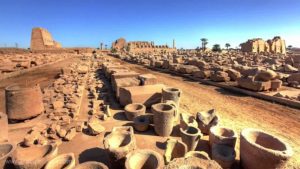 A team of four men could produce 3,000 mudbricks per day.

Egypt, more particularly the Nile Valley between Aswan and Cairo, is blessed with a cornucopia of constructional resources. An ancient Egyptian who made the (sometimes very short) stroll from the edge of the Nile to the edge of the desert would brush past rushes and reeds, which could be used to make matting, roofs, simple shelters and additions to houses; he would walk over the mud of the riverbank, which, combined with the sand of the desert and the chaff of the harvest, could easily produce the small quantities of mudbrick required to build a house or the huge quantities needed to fill the interior of a pyramid; he would see the limestone or, further south, sandstone cliffs that were a convenient local source of easily quarried building stone.

The surviving remains of the New Kingdom city of Thebes give a magnificent but misleading impression of ancient Egyptian cities. Along with the royal pyramids of the Old Kingdom, they suggest to the modern visitor that stone was the most commonly used building material in dynastic Egypt. However, this was not the case. Although stone was the ideal material of choice when building houses for the gods (temples) and houses for the dead (tombs), the vast majority of structures erected in ancient Egypt would have had little, if any, of this comparatively expensive material used within them. Houses for the living were primarily made from a sturdy yet essentially disposable material: mudbrick. This was used in the vast majority of structures inhabited by Egyptians of all classes, from townsfolk in their mudbrick houses to kings in their mudbrick palaces, to soldiers in their mudbrick forts. Some additional elements might be required – wooden roofing beams or stone doorframes or stone column-bases – but, in essence, mudbrick supplied most of a living Egyptian’s housing requirements, and also, through granaries and storerooms built on what could be a vast scale, met his storage needs. 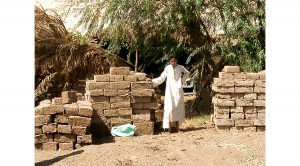 The simple process of producing mudbricks has changed little over the millennia: this pile of finished bricks at Gebelein could easily have been produced by the workers shown in the following image. Steven Snape.

Left alone, these structures survive well in the dry Egyptian climate, as ancient mudbrick structures from the predynastic period prove. However, any significant amount of moisture is disastrous, turning the brick back into the damp, formless mud from which it came. For the ancient Egyptians, however, this was not a significant problem. Most mudbrick structures consisted of houses built in ordinary towns and villages close to the Nile, and were therefore susceptible to flooding during the inundation, but such structures could be regarded as essentially disposable owing to the comparative ease with which they could be rebuilt.

Mudbrick was the ideal building material for ancient Egypt. It could be used by a peasant to build a wall that could turn his house from a five-room to a six-room dwelling. It could also be used by a king to fill the vast interior of a pyramid. It was just a matter of organization. The peasant making his house alterations would, perhaps, organize a group of friends or neighbours to collect the required amount of soil, which would be taken to a flat, dry piece of ground, as close as possible to where the brick was to be used. The most sophisticated tool required was a simple brick mould: a rectangular frame of wood, open on both sides, which was placed on the ground, filled with the mud-mix, smoothed off and then lifted to leave the wet brick firm and glistening on the ground.

Wooden model from the Middle Kingdom with their mattocks for digging out the mud and simple brick-mould. akg-images/Bible Land Pictures.

Because the soil would have been mixed with water and sand or chaff (or both), the damp mud would now be firm enough to retain its shape while it dried. Moreover, the straw chaff would make the brick porous enough to dry out thoroughly without cracking, and the addition of sand or straw would reduce shrinkage. Although the well-graded silt of the banks of the Nile or local canals was in many ways ideal, pure Nile mud shrinks by 30 per cent during the drying process. The composition of mudbrick varied considerably, and most bricks were adapted to make best use of locally available ‘ingredients’. Modern experiments in brickmaking suggest that the best mix for mudbrick is 1 cubic metre (35 cubic ft) of soil plus ⅓ cubic metre (12 cubic ft) of sand and 20 kg (44 lb) of straw. Once ‘struck’ the brick would be left to dry for about three days, turned and allowed to dry for a further three days, after which it would be ready for use. 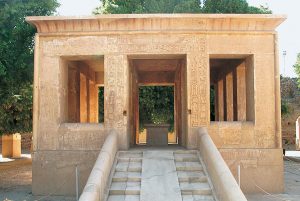 The ‘White Chapel’ of Senwosret I at Karnak is an outstanding example of the use of high-quality limestone. It also contains one of the most important nome lists. Steven Snape.

Our understanding of how bricks were manufactured comes from three major sources. One is ancient bricks and brick structures themselves. Another is the study of modern brickmaking, which operates today in much the same way it probably did in ancient Egypt – either a personal or community-based project, or a more ‘official’ process, particularly in the revival encouraged by the work of the Egyptian architect Hassan Fathy. Another major source of information is the illustration of the process in wooden models or on the walls of a few Egyptian tombs; the scene from the New Kingdom tomb of Rekhmire is especially interesting in that it shows brickmaking for an official, state project, but the processes involved comprise the same low-level technology that would have been used at a village level. 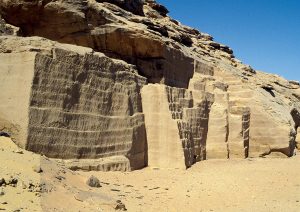 The quarrying-marks, showing where layers of sandstone blocks have been removed, are still visible at the extensive Gebel Silsila sandstone quarries, the most important source of building stone for New Kingdom Thebes. Steven Snape.

Relatively small amounts of stone were used in most domestic buildings, limited particularly to parts of the structure that were load-bearing (e.g. column-bases) or wear-heavy (e.g. doorframes). The situation was rather different for structures that were intended to have a longer lifetime than the buildings in most settlements. Projects especially favoured with large-scale use of stone tended to be royal commissions – essentially major temples and royal or elite tombs.

For limited domestic use and the bulk of major constructions, local stone from a conveniently nearby quarry was preferred. This meant one of the two types of ‘soft’ stone available in the Nile Valley – limestone (from the apex of the Delta as far south as Esna) and sandstone (from Esna south into Nubia). However, the Egyptians were always aware of the balance to be struck between the quality and convenience of building stone; local stone was not necessarily of the best quality, but might be usable for buildings that did not require a high-quality finish. Limestone is the best example of this because it has the widest range of quality of any stone used by the Egyptians, from the extremely fine-grained limestone used in the ‘White Chapel’ of Senwosret I at Thebes, to the crude nummulitic limestone (so-called because of its rough coin-like fossil inclusions) found in some of the smaller provincial temples in Middle Egypt. 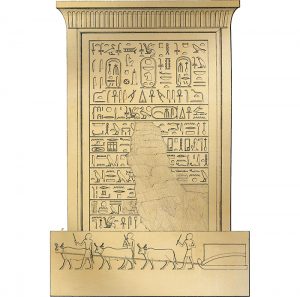 Individual quarrying expeditions were often recorded at quarry sites. This elaborate example celebrates the re-opening of the limestone quarries at Masara to supply building stone for the temples of Ptah at Memphis and Amun at Karnak. Steven Snape.

The quarrying-marks, showing where layers of sandstone blocks have been removed, are still visible at the extensive Gebel Silsila sandstone quarries, the most important source of building stone for New Kingdom Thebes. Steven Snape.

In terms of the selection of building stone, Thebes is the most interesting case study, given the extent and variety of its New Kingdom monuments. Although Thebes is in a limestone region, the quality of the local limestone is not very high, as it contains many fractures and flint inclusions. For the major building projects of the New Kingdom, therefore, the main quarry was not in the limestone area around Thebes, but was the sandstone workings at Gebel Silsila, 130 kilometres (81 miles) upstream from Thebes, where quarries on both banks of the Nile, located very close to the river, minimized the problems of overland transportation of the stone blocks to river barges (often a difficulty at other quarries).

Granite, chiefly from the Aswan area, was the principal ‘hard stone’ used in architecture. The other hard stones used in building to a significant degree are quartzite and basalt. These were most often used in specialized contexts, particularly in important elements of the temple, such as entranceways, altars, shrines, obelisks and statues.