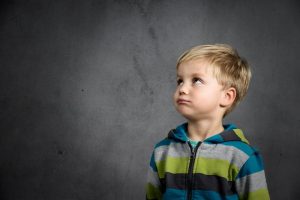 There are children who question everything and are not satisfied with any answer. These little ones often challenge the rules because they like to go beyond the established, discuss adult responses and more than once put them in an embarrassing situation, causing them to perceive their inconsistencies or absurdities.

This attitude can exacerbate some parents making them lose their patience. However, this behavior is followed by good news: Children who always question things become often more secure and successful adults.

These children develop a critical thinking

The fact that children do not take for good the first answer they receive and want to continue to deepen the argument is not a bad thing. Nor is it bad for children to reflect on adult responses and not accept them without arguing, as if they were absolute truths.

This attitude denotes that the child thinks for himself and is interested in deepening the facts. Not being staisfied with an answer until you understand it is synonymous with intelligence and self-confidence. It would be much worse for the child to accept an answer he does not understand, just because he is afraid that adults believe he is not smart enough to understand it right away.

When a child discusses something is a signal that is putting his critical thinking into motion, and this is always a good thing. These children simply need more explanations to convince them.

This attitude, in a sense, also represents a challenge to rules and authority. The child takes away the “control” of the adult for a few moments, discussing his arguments. Also this is not negative because it helps to consolidate one’s identity and practice this ability so that an adult will be less inclined to believe something without thoroughly analyzing the theme, only for the referent’s power or because said by someone or an “Important” media.

This is confirmed by psychologists at the University of Luxembourg who have analyzed the personality traits of 700 children for several decades since they were nine years old up to 40. It is interesting to note that the people who had the best jobs and earned most were those who were more challenging children, always ready to challenge and sometimes ignored the rules of their parents. They were not more competitive kids only, but also claimed the most from the world, growing up they did not win for win and fight for their interests.

These results are related to a previous study on the father-son relationship of the Germans who during the Second World War protected the Jews. The researchers found that those parents had encouraged the free thinking of their children and educated them in respect of diversity. Therefore, respecting different views of children increases the chances that these will think for themselves as adults, adopt a critical attitude, and do not allow themselves to be too easily influenced by others.

Psychologists from the University of Virginia analyzed 157 teenagers aged 13 and over, making videos that reported situations where they had disagreed strongly with their parents by questioning their decisions, behaviors, and/or rules.

When the parents saw the images of their children telling the story, they reacted differently. Some smiled while others felt uneasy and angry.

These psychologists came back to the theme two years later. Interviewed again the boys, this time they were 15 or 16 years old. They discovered that the adolescents children of parents who adopted a more calm and persuasive attitude when these contradicted them were less likely to use drugs and alcohol. These guys had learned to disagree in a calm but secure way. In fact, they were 40% more likely to say “no” to their friends when they were not interested in the proposal.

Conversely, when parents imposed their opinion, teenagers took more passive behaviors that approached them at risk groups. Therefore, these psychologists are convinced that parents’ attitudes when their children challenge them is crucial because later these children learn to disagree with others and develop a strong self-esteem. When children feel comfortable in expressing their disagreement with their parents, they will feel the same way with friends, partners or at work.

How to properly handle a relationship with a child who questions everything?

When children question everything, parents can take the opportunity to give them a little lesson of life by teaching them to disagree assertively.

– Listen. When parents listen to their children, children also learn to listen. You do not always have to agree, but if someone introduces a good argument, it is fair to recognize it. It does not mean to win or lose, but to communicate.

– Keep calm. Growing children challenge the authority and limits imposed by parents. It’s normal. The job of parents is to keep calm and respond assertively, so that children can learn to interact appropriately. If you lose control you will be teaching that this is also a valid behavior. If you cry, it is likely that in the future your son will be afraid to express his ideas and dissent. If you pay attention, you will perceive that your ideas are valid and worthy of being taken into consideration.

– Stop being attached at the idea of control. As children grow, parents should gradually let them have more autonomy, allowing them to decide on their own. Unfortunately, in many cases, we respond badly to their provocations because we feel insecure and think that we should maintain the authority in part because this is the model with which we grew up.

– Negotiate. Life is a continuous negotiation, those who do not have this skill are socially disadvantaged. Therefore, if your son challenges you, it is better that you do not enter into a power struggle that will turn you away from him, negotiate, and seek an agreement where both of you can win. As your son grows up he has to feel that he is gradually acquiring control and is able to make his own decisions.

– Remember you are educating a child who will become an adult. Your children, at some point in their lives, will have to follow their own way. No matter if they are 3, 5, 10 or 15 years old, whenever they agree with you, they send you a clear message: we are independent people who have their own ideas, feelings and desires. Your job is to help them develop and become self-confident people.

When does the challenge become a behavioral problem?

There are cases where opposing and provocative behaviors are a behavioral problem that deeply affects family dynamics. The difference lies in the fact that these children do not want to talk, they do not offer arguments or want to deepen the question, but simply want to do what they want. Also, these children seem to be constantly angry and enjoy deliberately harassing others.