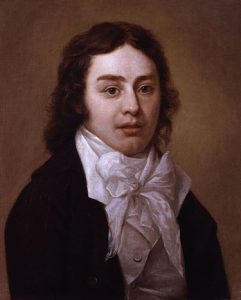 Much of the poetry in the Wellcome Library is anonymous – in many cases, it is amateur material bad enough for the author to be grateful for a cloak of anonymity – but our archives do also contain material by ‘proper’ poets and here we highlight one: Samuel Taylor Coleridge (1772-1834).

Ask anyone to name some poets that make up the approved canon of English literature prior to 1900, and the chances are that it will be heavily biased towards the Romantic poets. A generation that did much to shape popular views of poets subsequently, as people with flowing locks and furrowed brows, thinking deep thoughts about Nature. Among these, Coleridge is a key figure.One of the founding texts of the British Romantic movement is the anthology ‘Lyrical Ballads‘, published in 1798 by Coleridge and William Wordsworth: the majority of the book’s poems were by Wordsworth, but it was Coleridge’s ‘The Rime of the Ancient Mariner‘ (the longest poem in the volume) that gathered the most praise and attention. 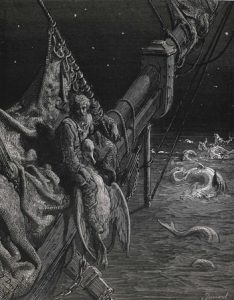 For some years Coleridge burned brightly as a poet, forming part of a circle of writers centred on Wordsworth’s home in the Lake District. By the early years of the 19th century, however, his output was waning; in part because he was devoting more energy to philosophy and an attempt to import German Idealist concepts into the English tradition, but chiefly because of personal problems.

His marriage, never happy, ended in separation; he quarrelled with Wordsworth; he had periods of intense anxiety and depression; and, most notoriously, in attempting to self-medicate his way out of his troubles, he had become addicted to laudanum (a solution of opium in brandy). This addiction was to overshadow the rest of his life: after ‘To William Wordsworth‘ in 1807 he wrote little poetry of worth, and his prose works were chiefly disorganised sketches towards the great philosophical work that he was, he assured the world, going to write one day, just as soon as his addiction was cured.

In 1816 Coleridge had moved into the house of John Gillman, a Highgate surgeon, in the hope that Gillman might control his addiction, and remained here for the rest of his life. At the London Philosophical Society in 1818 he met Thomas Allsop, who became a disciple and began to record Coleridge’s conversation; at the same period he met the surgeon Joseph Henry Green, with whom he discussed philosophy regularly for the rest of his life. (Coincidentally, John Keats studied under Green at Guy’s Hospital and through this connection the two poets met briefly.) 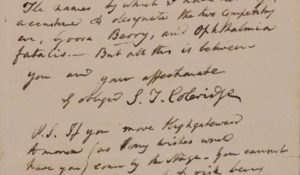 The Coleridge item in the Library is a letter that dates from 1820, during this period of decline. It shows how thoroughly Coleridge had acclimatised to this medical milieu: in it he writes to Allsop about Green’s efforts to secure a place at St. Thomas’s Hospital, and asks Allsop to exert himself in Green’s favour. He also passes on some gossip about one of Green’s rivals, Frederick Tyrrell, Assistant Surgeon to the London Eye Infirmary (later Moorfields Eye Hospital): according to him, Tyrrell obtained this post through the strong backing of the eminent surgeon Sir Astley Cooper (1768-1841), Tyrrell being Cooper’s former pupil, despite Cooper knowing that Tyrrell was not the best man for the job. Coleridge comes down hard on Cooper, accusing him of voting against his conscience (casting doubt on whether he even has one), and commenting that “the known inexperience & shallowness of the man made [backing him for the job] amount to downright impudence!” 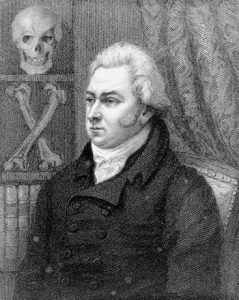 It’s an entertaining cat-fight set in the midst of a web of personal connections and rivalries; but it’s not poetry, and it’s an indication of how Coleridge spent his time in these later years, having seemingly lost his gift for good. The one bit of ‘literary’ language in the letter, a postscript complaining about the weather, is a laboured piece of prose far removed from the plain speech favoured in the ‘Lyrical Ballads’:

“If you move Highgatewards tomorrow…come by the stage – you cannot be too careful not to risk being wet & the weather is almost hysterical, more like Miss April in the green sickness than Lady June married to Sir Phebus Summer.”

A ‘proper’ poet, then, but the letter held at the Library shows other sides of him.  He appears here as a man immersed in a medical milieu and involved in the intensely personal medical politics of the time; but also, underlying that, as a man whose mental health and drug addiction had derailed his talent, whose best work was long behind him, a gift burnt out.  The trouble with being a ‘proper’ poet relying on inspiration is that the inspiration can dry up; a problem that the anonymous hacks whose rhyming couplets make up most of our poetic holdings did not have to worry about.