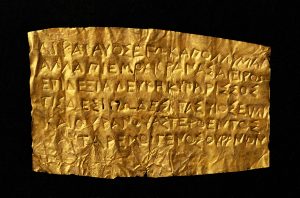 How some ancient Greeks navigated their passage to a happier afterlife.

(Initiate): I am parched with thirst and perishing!
(Spring): Then come drink of me, the Ever-Flowing Spring, on the right—a bright cypress
is there. Who are you? Where are you from?
(Initiate): I am the son of Earth and Starry Heaven. But my race is heavenly.

This conversation written in ancient Greek contains many mysteries. Who is the parched wayfarer claiming divine descent? What and where is this talking spring? And why is this exchange recorded on a wafer-thin gold tablet?

This inscribed tablet in the Getty Villa’s collection dates to 350–300 B.C. and appears in the exhibition Underworld: Imagining the Afterlife. It is one of some forty so-called Orphic tablets. They are—quite literally—golden tickets to a happier afterlife. Most date between the fourth and first centuries B.C., and examples have been found across the Mediterranean—in Sicily and southern Italy, northern Greece, the Peloponnese, and Crete—but they remain exceedingly rare.

These tablets offer tantalizing insights into an ancient culture’s approach to some universal human anxieties: What happens when we die? Does life simply end? Does the self continue to exist in some way? Is there anything to look forward to in the world beyond?

Greek Beliefs about the Afterlife

“A panoramic survey of death in early Greek culture is not a sensible undertaking.” So begins Emily Vermeule’s Aspects of Death in Early Greek Art and Poetry (1979), one of my favorite books on the topic of Greek attitudes to the afterlife. Classicists and archaeologists studying ancient cultures must always struggle with the fragmentary or incomplete nature of the evidence. But it’s especially difficult to draw solid conclusions about something so intangible, so bound up with hopes and fears, as what lies beyond this mortal coil.

I concentrated on two aspects while developing the exhibition Underworld: Imagining the Afterlife. First, the visuals—what did the Underworld look like? Second, how did individuals guarantee a better afterlife for themselves?

Here is where the gold tablets come in. Deposited in graves, they were placed on the deceased’s chest or mouth or in a hand. They usually bear a short text that proclaims the special status of the dead and provides guidance for their journey into the Underworld.

It bears stressing that very few people appear to have possessed one of these gold tablets, and those who did subscribed to beliefs that would have appeared esoteric and eclectic to their contemporaries. From what we understand, self-styled priests offered transformative experiences—doubtless for a price—that mainstream practice could not provide. As Plato describes in his Republic from the mid-370s B.C.:

Wandering priests and prophets approach the doors of the wealthy and persuade them that they have a power from the gods conveyed through sacrifices and incantations, and any wrong committed against someone either by an individual or his ancestors can be expiated with pleasure and feasting… And they produce a babble of books by Musaeus and Orpheus… and persuade not only individuals but cities that they really can have atonement and purification for their wrongdoing through sacrifices and playful delights while they are still alive and equally after death. These they actually call initiations, which free us from evils in the next world, while terrible things await those who neglect their sacrifices.

People who underwent initiations of this sort may have held gold tablets such as those we display in the exhibition. By incorporating oneself into a private cult, an individual could mark themselves as different from the masses, fast-tracking their way into the Underworld.

We don’t know who wrote the gold texts, and many contain scribal errors and strange spellings.  Some, such as the example in the Getty’s collection, take the form of a dialogue. Others seem to speak on behalf of the dead individual. But across the 40 or so examples, many share similar or even matching words and phrases.

Below are some key instructions from these tablets, a kind of “What to Do in Hades When You’re Dead” listicle, if you will. 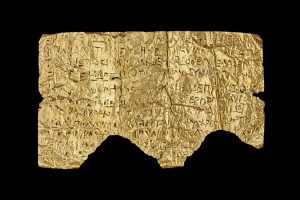 First things first, you need to head in the right direction. Many of the texts tell their owners where to go once they’ve arrived in the Underworld. For example, a tablet from an ancient site in Southern Italy called Petelia (illustrated above) advises:

You will find to the left of the house of Hades a spring
and standing by it a white cypress.
Do not even approach this spring!
You will find another, from the Lake of Memory,
cold water pouring forth; there are guards before it . . .

Heading left is a common instruction on the tablets, but there are some that advise their owners to go to the right instead. This discrepancy might seem rather disturbing—after all, this is the ultimate journey, so having the correct directions seems essential. The closer we read, the more we find advice that is inconsistent. In the text quoted above, the cypress tree clearly marks a spring that should be avoided. The initiate will see it, but must go further along the path to find the Lake of Memory. On the Getty tablet, however, a cypress marks the spring that invites the deceased to drink from its flowing water:

Then come drink of me, the Ever-Flowing Spring, on the right—a bright cypress
is there.

Such details—the left or right path, a tree that marks water to be avoided or approached—may have been muddled over time. But some discrepancies could have been intentional. In pursuit of followers (paying customers, in other words), traveling cult leaders could have offered alternative versions, asserting that theirs alone was correct.

As the directions make clear, the first goal upon on entering the Underworld is to reach the correct water source. The thirstiness of the dead is a recurring motif in many cultures. In Homer’s Odyssey, the blood from slaughtered offerings draws the shades of the dead to the hero (although they ultimately elude his grasp, as Odysseus pitifully discovers when he tries to embrace his mother). In the Orphic tablets, the soul seeks water instead. A cold draught from the Lake of Memory staves off the oblivion that death is feared to bring.

Once the deceased is on the right track and refreshed by a drink of memory-preserving water, she faces her next obstacle: saying the proper thing. Unnamed guardians or even the goddess of the Underworld, Persephone herself, may require a special password or passwords. Again, the gold tablets are not always consistent on the details of these words, but the theme of purity or divine origin recurs. Both the Getty and Petelia tablets feature the phrase “I am the son of Earth and Starry Heaven. But my race is heavenly.” The deceased is thus marked as distinct from the other souls of the dead and can justifiably claim a special place in the afterlife.

But what did the Underworld look like? Space on these precious tablets was limited, and rather than describe the blissful existence that is the special preserve of the initiate, most texts focus on the journey. Nevertheless, there are occasional allusions to reincarnation, and some tablets promise the initiate heroic or even divine status in the afterlife:

“thereafter you will rule among the other heroes”

“go to the pasture, having become divine.”

“and the same rites await you beneath the earth that the other blessed ones have.”

What is not spelled out is what one does for eternity in “the groves of Persephone” or in the company of “the other blessed ones,” as the achievement of an exalted state was attractive in and of itself. But a pair of tablets found in a grave in Greece in the 1980s state, “You have wine as your fortunate honor.” In other words, there will be drinking, or “everlasting drunkenness,” as Plato dismissively put it. 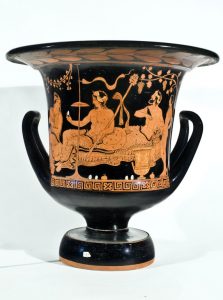 The Getty Villa’s exhibition features several depictions on Apulian vases that elegantly convey how appealing an eternal symposium might be. Looking at this mixing bowl (illustrated at right), you can almost feel the fragrant breeze as banqueters recline outdoors amid fine furnishings. They savor the beat of the tympanon (hand drum) and play a game of kottabos, in which participants flick dregs of wine at a target. A garlanded youth holds an egg and a thyrsos (ritual staff) that suggests he is the wine god Dionysos—or at very least one of his followers.

None of the gold tablets mention Orpheus, the mythical poet and seer with an enchanting voice. The name “Orphic tablets” is a modern invention, one that originated with the earliest investigations in the late nineteenth century. But even in antiquity, Orpheus was a figurehead for beliefs and practices on the fringes. He had magical powers as a singer; most famously, he persuaded the gods of the Underworld to release his dead wife, Eurydice. Tragically he disobeyed their command not to look back, forever losing his bride.

This episode is poignantly depicted on a well-known marble relief on display in the exhibition, which shows Orpheus and Eurydice touching one last time. Orpheus’s experience of descending into the Underworld and returning alive made him an exceptional figure in Greek myth and belief. His story and powers as a poet make him a rare thing: a potential guide to the afterlife—someone who can share knowledge of what is otherwise unknowable. 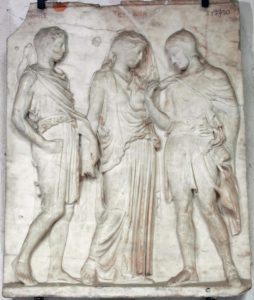 Many poems—known today only from their titles or fragmentary quotations—were attributed in antiquity to Orpheus. More than one recounted his journey into the Underworld. The self-styled itinerant preachers mentioned above were elsewhere referred to as orpheotelestai (ritual initiators of Orpheus). Invoking Orpheus as their authority, they taught that there were special rites that promised deliverance from suffering in the afterlife.

I find it fascinating that these gold tablets show how some individuals in the ancient Greek world—both men and women, judging by the language of the texts—figured out a way to deal with the unknown. Through an initiation into mystery cults associated with Orpheus and probably Dionysos too, one could, while still alive, reserve a place for eternity among the gods and heroes. The gold tablets served as both a badge of status and a handy cheat-sheet for the soul on its final journey.