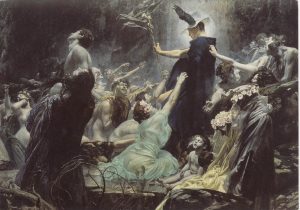 The dead wait to be ferried across the River Styx. The Souls of Acheron (1898) by Adolf Hiremy Hirschl

For the ancients, ghosts could be quite useful.

Dressing up, knocking on neighbours’ doors and asking for food is a very old tradition. Communities on the British Isles were taking part in similar rituals as far back as the 16th century.

For centuries, people have believed autumn was the time when the boundary between our world and the spirit world became permeable. Terrifying outfits and specific rituals were designed and used to ward off or appease evil spirits roaming the earth around All Hallow’s Eve. But evidence has also been found of ordinary people, as early as the times of the ancient Greeks and Romans, using magical incantations throughout the year to call on those departed to help the living. 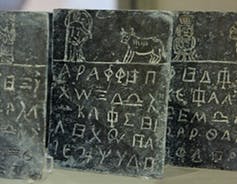 Though the Romans certainly invoked spirits for aid, they also felt the need to placate the dead. According to the Roman poet Ovid, at the Lemuria festival in May, the pater familias – that is the head of the household – walked around the house at midnight, throwing black beans on the floor to pacify any ancestral spirits who might be vengeful because they had not been buried.

The Romans thus had similar concerns regarding angry spirits, but, like the Greeks, they also saw the uses of those vengeful dead in their daily quest for happiness.

The Greeks and Romans were as anxious about their health and happiness as we are today. So other, more private – sometimes questionable – approaches were tried, and such practices became labelled as “magic” as early as the fifth century BC.

The perceived success or failure of magic depended on the precise combination and execution of spell, ingredients, and ritual. Of paramount importance in the casting of a spell was acquiring assistance from the right supernatural entity.

Many people invoked the gods Zeus or Jupiter, arch angels, or demons such as the terrifying Abrasax. But the angry dead offered equal potential: the Greeks and Romans believed that those who had died before their time, such as children or soldiers, were particularly restless and likely to offer help. 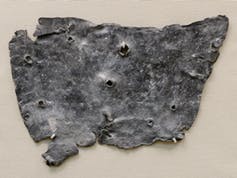 Lots of these spells, written on lead tablets, have been found in or near graves in cemeteries, folded and often pierced several times.

In a collection of spells called the Greek Magical Papyri, one spell instructs the person wishing to create a spell of attraction:

Go quickly to where someone lies buried … spread a donkey’s hide under him at about sunset. Return home and he will actually be present and will stand beside you on that night … Say: “I adjure you, dead spirit, by the Destiny of Destinies, to come to me, [insert your name], on this day, on this night, and agree to the act of service of me. And if you don’t, expect other chastisements”.

The reason the “chastisements” are mentioned in the spell above is that the dead were not always willing assistants. In his novel Metamorphoses, the Roman author Apuleius narrates how the Egyptian prophet Zatchlas was able to make the corpse of a young man come to life again so he might tell his relatives who was his murderer.

Once awake, however, the young man groaned: “Why, pray, do you restore me to the tasks of fleeting life? Desist now, I beg you, desist, and leave me in peace.” The young man finally succumbed to Zatchlas’s urging and informed his audience that his new bride had poisoned him.

The modern notion that those who have died before their time are eager to wreak havoc is thus not universally applicable. By means of the correct rituals, however, any spirit might be pacified or compelled to assist.

The modern Western world likes to think it is far removed from these Greek and Roman rituals – impervious to magical superstitions – and the restless dead confined to the cinema screen and Halloween costumes. But studying these past rituals can help us understand that these magic spells had a powerful function for the ancients, intended to last for many centuries.

More than anything, it demonstrates that it is not the dead that need to be feared, but the living who conjure them for their own nefarious gains.