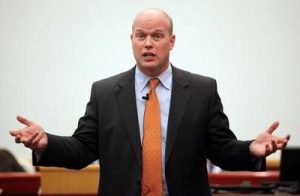 As we and others have noted, the Judicial Crisis Network, the primary outside group backing the Senate GOP’s blockade of President Obama’s Supreme Court nominee, is funded almost entirely by a dark-money group connected to a single family of conservative donors.

On Friday, Open Secrets uncovered that the same dark-money network funding JCN is behind another group that is working to oppose Merrick Garland’s nomination: the Foundation for Accountability and Civic Trust (FACT).

Open Secrets reports that FACT, which styles itself as a right-wing alternative to Citizens for Responsibility and Ethics in Washington (CREW), receives all of its funding through Donor’s Trust, a donor-advised fund that acts as a “pass-through vessel” for conservative funders, making the source of contributions all but impossible to trace. But Open Secrets found evidence linking FACT to the Corkery family, who are behind a number of conservative groups including JCN. JCN and FACT share a treasurer, Neil Corkery, and FACT has the same front address as a number of Corkery-linked groups.

The executive director of FACT and the sole paid employee listed on its most recent tax filing is Matt Whitaker, a former U.S. Attorney from Iowa who we here at Right Wing Watch remember from his unsuccessful run for his home state’s Republican Senate nomination in 2014 (it ultimately went to now-Sen. Joni Ernst). When asked at a debate what criteria he would use to determine whether to support or attempt to block President Obama’s federal judicial nominees, Whitaker said that he would ask if nominees are “people of faith” and “have a biblical view of justice.”

“As long as they have that worldview, then they’ll be a good judge,” he said. “And if they have a secular worldview, where this is all we have here on earth, then I’m going to be very concerned about how they judge.”

From the Open Secrets report on FACT:

One right-leaning group has weighed in more quietly: The Foundation for Accountability and Civic Trust (FACT) has demanded Harvard University release records having to do with Garland’s role in the debate in the early 1970s over whether to allow ROTC recruiters on that campus. In late March, FACT’s executive director, Matthew Whitaker, was quoted saying that “Americans have a right to know about Garland’s views of the military.”

Turns out JCN and FACT have something in common, beyond a penchant for keeping the names of their donors secret: Neil Corkery, who is treasurer of the judicial group and also the treasurer and a member of the board of directors at FACT, a 501(c)(3) organization.

Its funding — $600,000 in 2014, according to the only tax return it has filed to date — comes entirely from a conservative donor-advised fund called DonorsTrust, which means it could come from anywhere. DonorsTrust is a pass-through vessel that manages the charitable contributions of wealthy individuals and foundations to organizations that are “dedicated to the ideals of limited government, personal responsibility, and free enterprise,” according to its website, while allowing the donors to remain anonymous. Charles Koch is among the many conservatives who have filtered money through DonorsTrust.

In other words, an organization “dedicated to promoting accountability, ethics, and transparency” gets 100 percent of its funds from a group that exists mainly as a vehicle for donors to elude transparency.

Meanwhile, Corkery adds FACT to a long list of nondisclosing nonprofits at which he holds, or has held, a key position, often treasurer, and which often have overlapping slates of directors or officers. For instance, at two other groups where Corkery is treasurer, the Judicial Education Project and Catholic Voices, a close family ally by the name of Dan Casey is president and director, respectively. Casey is also the secretary of JCN. At the Sudan Relief Fund, Corkery is president, Casey is treasurer, and Ann Corkery, Neil’s wife, is a director.

Ann Corkery is also president of the Wellspring Committee, from which JCN receives substantial funding, including more than $6.6 million in 2014; Kathleen Corkery, the couple’s daughter, is on Wellspring’s board of directors, and its secretary-treasurer is Casey’s son. Neil Corkery draws salaries from several of the groups where he’s an office; Ann is paid by Wellspring. (Venn diagram in the works.)

Many of the groups list the same Georgetown address as their office, with different suite numbers. In reality, the address is that of a UPS store, and the suite numbers are post boxes. FACT’s listed address, in downtown Washington, D.C., has no markings; it appears to be an address that is cited by more than one organization without actually being physically used by any of them, with a receptionist who answers the phone with the names of various groups depending on which line is called.