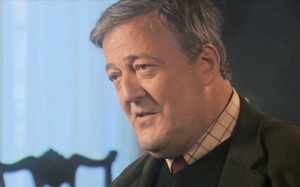 Stephen Fry gave an interview to Ireland’s RTE Network in which he was asked, as an atheist, what he would say if he died and found out God was real.  His response went viral.

He has been nominated for the “Interview of the Year” award by the Sanford St. Martin Trust, a religious organization celebrating “excellence in religious broadcasting”.

There was a time when an interview like this would not have been given much less be up for an award from any organization, especially religious!

Following is the interview with a transcript of his response:

“I’d say, ‘bone cancer in children? What’s that about? How dare you. How dare you create a world to which there is such misery that is not our fault. It’s not right, it’s utterly, utterly evil,’” Fry said. “Why should I respect a capricious, mean-minded, stupid God who creates a world that is so full of injustice and pain? That’s what I would say… The God who created this universe, if it was created by God, is quite clearly a maniac, utter maniac. Totally selfish. We have to spend our life on our knees thanking him; what kind of God would do that?”

Mr. Fry once debated as a partner with Christopher Hitchens in which they massively won the day in the final vote.  Hitchens would be proud, proud indeed.