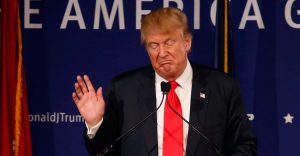 “Enemies of the people.”

That’s how President Donald Trump describes journalists who offer anything but Breitbart-style fawning coverage of him and his administration. He first tweeted out the epithet a couple of weeks ago, adding it to his stockpile of rhetorical ammunition alongside favorites like “fake news.” This past Friday, he doubled down on his remarks while speaking at the Conservative Political Action Conference.

“A few days ago, I called the fake news the enemy of the people because they have no sources – they just make it up,” he said. This from the man who pushed (without sources) the fantasy that Barack Obama was not an American citizen and refers to Swedish terrorist attacks that never happened.

His top advisor, Steve Bannon, calls the press “the opposition party,” as if it were a partisan political organization. And his press secretary, Sean Spicer, held an invitation-only press “gaggle” on Friday afternoon which excluded a number of major media outlets – the New York Times, the Guardian, the Los Angeles Times, Politico, CNN, BBC, and others. By contrast, journalists from conservative-leaning organizations such as Fox News and right-wing propaganda outlets like the Washington Times, Breitbart, and One America News Network were on the VIP list. The Associated Press and Time magazine boycotted in protest.

It was a clear directive that when you publish or broadcast what the boss likes, you get special privileges. When you don’t, you get shut out. It’s a not-so-subtle way of encouraging self-censorship, while also telling the rabble to distrust reputable journalism even more. To the legions of Trump voters, the message is: stick with the propaganda.

The president and his deputies appear to be making good on his threat to “do something” about journalism that the White House doesn’t like. Another president, Richard Nixon, also once declared, “The press is the enemy.” But Carl Bernstein, one of the Washington Post reporters who exposed Nixon’s Watergate scandal in the 1970s, says Trump’s rhetoric “may be more insidious and dangerous.” There is a similarity, he says, “in trying to divide the country, and make the conduct of the press the issue, instead of the conduct of the president.”

The emergence of reports late Friday afternoon – at the exact time the press ban was making headlines –confirming that White House chief of staff Reince Priebus may have broken the rules and pushed the FBI to publicly dispute that Trump campaign officials were in communication with Russian intelligence agents during the election certainly make Spicer’s move seem like a distraction.

Taken as a whole, the words and actions of President Trump and his inner circle constitute a wide-ranging attack on the free press that is unprecedented in modern times. And his embrace of the term “enemy of the people,” a phrase more associated with dictators than democrats, makes these developments all the more troubling.

The Roman emperor Nero – known for “fiddling while Rome burned” – was the first historical figure to earn the title. He vacationed in places not too dissimilar from Mar-a-Lago while the economic future of his people crumbled.

In recent times, the phrase is associated with the mass purges in the Soviet Union during the 1930s. In condemning the repression carried out by Joseph Stalin, Soviet leader Nikita Khrushchev said that branding someone an “enemy of the people” was a means of shutting down debate and silencing opposition. “This term automatically made it unnecessary that the…errors of a man or men engaged in a controversy be proven. It made possible the use of the cruelest repression, violating all norms of…legality against anyone who in any way disagreed…”

While Trump’s attempt to tamp down unfriendly press coverage may be rather mild in comparison to the Stalinist terror, the goal of shutting up anyone who disagrees with the leader is all too apparent. It’s a development that goes against the principles of democracy and should worry all Americans.

This publication – People’s World – has credentials in the fight for a free press in the United States. At various times in its history, this newspaper has been the subject of attacks by those in power who disagreed with the news and views it printed. Whether it was taking on J. Edgar Hoover or Joseph McCarthy, People’s World and its predecessors have always stood for the tradition of free and independent journalism in this country. It’s a tradition that still needs defending today.

Trump’s attacks may be the most insidious and acute threat to the free press, but there are others. The continuing concentration of ownership and control of media outlets in the U.S. threatens the diversity of perspectives and news coverage necessary for a free and functioning democratic society.

In 1983, the media landscape was dominated by approximately 50 large companies. Four years later, it was down to 29. In the late 1990s, ten. Today, only six corporations control more than 90 percent of the media market in the United States. 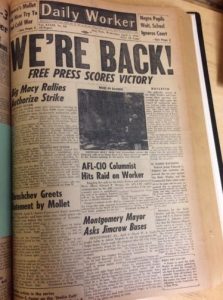 The front-page of the April 4, 1956 edition of Daily Worker, a predecessor publication of People’s World. The lead story covers the attempt of the IRS to shutdown the paper after raiding its offices. The paper appeared the very next morning, however, never missing an issue. | C.J. Atkins / PW archives

Journalism is under threat on multiple fronts. Many traditional media channels and local outlets – especially, but not only, newspapers – are collapsing under technological and financial pressures. Newsrooms – those that survive anyway – are cutting staff to the bare bones. Money for the hard work of investigative journalism is shriveling as shrinking profit margins make it unfeasible for all but the biggest of outlets.

There is also the threat of actual fake news – not just the unfriendly coverage President Trump drones on about. Too many people are falling into the habit of only following (or, thanks to social media algorithms, only receiving) reporting that reinforces their prejudices.

And though they may be important allies in exposing what the Trump administration is up to, the corporate-controlled conglomerates that dominate the media scene cannot be counted on to stem the tide.

As journalism professor Robert W. McChesney wrote nearly twenty years ago, the big press conglomerates may sometimes have a positive impact, given that they will chase profit without respect to repressive governments or customs. But these same companies, he said, are ultimately “politically conservative, because the media giants are significant beneficiaries of the current social structure around the world…any upheaval in property or social relations – particularly to the extent that it reduces the power of business – is not in their interest.”

Professional journalists of whatever employer must join in resisting the machinations of Trump, Bannon, and Spicer, but we can’t only rely on Comcast, Time Warner, or The Walt Disney Company to save the First Amendment. It will fall to all of the citizen-reporters, local editors, anonymous sources, conscious news consumers, and everyone else to do the job.

As one editor of this paper once said, “The way to preserve democracy is to practice it.”