The artifact known as the Venus of Willendorf dates to between 24,000-22,000 B.C.E., making it one of the oldest and most famous surviving works of art. But what does it mean to be a work of art?

The Oxford English Dictionary, perhaps the authority on the English language, defines the word “art” as:

the application of skill to the arts of imitation and design, painting, engraving, sculpture, architecture; the cultivation of these in its principles, practice, and results; the skillful production of the beautiful in visible forms.

Some of the words and phrases that stand out within this definition include “application of skill,” “imitation,” and “beautiful.” By this definition, the concept of “art” involves the use of skill to create an object that contains some appreciation of aesthetics. The object is not only made, it is made with an attempt of creating something that contains elements of beauty.

In contrast, the same Oxford English Dictionary defines the word “artifact” as, “anything made by human art and workmanship; an artificial product. In Archaeol[ogy] applied to the rude products of aboriginal workmanship as distinguished from natural remains.” Again, some key words and phrases are important: “anything made by human art,” and “rude products.” Clearly, an artifact is any object created by humankind regardless of the “skill” of its creator or the absence of “beauty.” 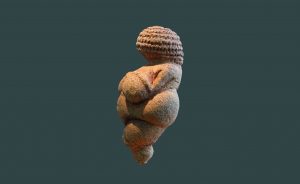 Artifact, then, is anything created by humankind, and art is a particular kind of artifact, a group of objects under the broad umbrella of artifact, in which beauty has been achieved through the application of skills. Think of the average plastic spoon: a uniform white color, mass produced, and unremarkable in just about every way. While it serves a function—say, for example, to stir your hot chocolate—the person who designed it likely did so without any real dedication or commitment to making this utilitarian object beautiful. You have likely never lovingly gazed at a plastic spoon and remarked, “Wow! Now that’s a beautiful spoon!” This is in contrast to a silver spoon you might purchase at Tiffany & Co. While their spoon could just as well stir cream into your morning coffee, it was skillfully designed by a person who attempted to make it aesthetically pleasing; note the elegant bend of the handle, the gentle luster of the metal, the graceful slope of the bowl.

These terms are important to bear in mind when analyzing prehistoric art. While it is unlikely people from the Upper Paleolithic period cared to conceptualize what it meant to make art or to be an artist, it cannot be denied that the objects they created were made with skill, were often made as a way of imitating the world around them, and were made with a particular care to create something beautiful. They likely represent, for the Paleolithic peoples who created them, objects made with great competence and with a particular interest in aesthetics.

Upper Paleolithic refers to the period between approximately 40,000 and 10,000 years ago. “Upper” is the most recent of three sub-divisions of the Paleolithic period (Lower, Middle and Upper). The word itself is made of two parts. “Paleo” which means old and “lithic” which means stone. Stone Age is a reference to the chronology of material technology of a given time. The Stone Age comes before the Bronze Age for example. Paleolithic is the oldest of three stone-age periods (Paleolithic, Mesolithic and Neolithic). Thus “Upper Paleolithic” refers to the most recent period of the old stone age.

Two main types of Upper Paleolithic art have survived. The first we can classify as permanently located works found on the walls within caves. Mostly unknown prior to the final decades of the nineteenth century, many such sites have now been discovered throughout much of southern Europe and have provided historians and archaeologists new insights into humankind millennia prior to the creation of writing. The subjects of these works vary: we may observe a variety of geometric motifs, many types of flora and fauna, and the occasional human figure. They also fluctuate in size; ranging from several inches to large-scale compositions that span many feet in length.

The second category of Paleolithic art may be called portable since these works are generally of a small-scale—a logical size given the nomadic nature of Paleolithic peoples. Despite their often diminutive size, the creation of these portable objects signifies a remarkable allocation of time and effort. As such, these figurines were significant enough to take along during the nomadic wanderings of their Paleolithic creators. 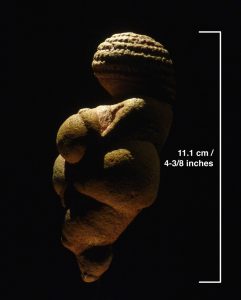 The Venus of Willendorf is a perfect example of this. Josef Szombathy, an Austro-Hungarian archaeologist, discovered this work in 1908 outside the small Austrian village of Willendorf. Although generally projected in art history classrooms to be several feet tall, this limestone figurine is petite in size. She measures just under 4½” high, and could fit comfortably in the palm of your hand. This small scale was very deliberate and allowed whoever carved (or, perhaps owned) this figurine to carry it during their nearly daily nomadic travels in search of food.

Clearly, the Paleolithic sculptor who made this small figurine would never have named it the Venus of Willendorf. Venus was the name of the Roman goddess of love and ideal beauty. When discovered outside the Austrian village of Willendorf, scholars mistakenly assumed that this figure was likewise a goddess of love and beauty. There is absolutely no evidence though that the Venus of Willendorf shared a function similar to its classically inspired namesake. However incorrect the name may be, it has endured, and tells us more about those who found her than those who made her.

Dating too can be a problem, especially since Prehistoric art, by definition, has no written record. In fact, the definition of the word prehistoric is that written language did not yet exist, so the creator of the Venus of Willendorf could not have incised “Bob made this in the year 24,000 B.C.E.” on the back. In addition, stone artifacts present a special problem since we are interested in the date that the stone was carved, not the date of the material itself. Despite these hurdles, art historians and archaeologist attempt to establish dates for prehistoric finds through two processes. The first is called relative dating and the second involves an examination of the stratification of an object’s discovery.

Relative dating is an easily understood process that involves stylistically comparing an object whose date is uncertain to other objects whose dates have been firmly established. By correctly fitting the unknown object into this stylistic chronology, scholars can find a very general chronological date for an object. A simple example can illustrate this method. The first Chevrolet Corvette was sold during the 1953 model year, and this particular car has gone through numerous iterations up to its most recent version. If presented with pictures of the Corvette’s development from every five years to establish the stylistic development from its earliest model to the most recent (for example, images from the 1953, 1958, 1963, and all the way to the current model), you would have a general idea of the changes the car underwent over time. If then given a picture of a Corvette from an unknown year, you could, on the basis of stylistic analysis, generally place it within the visual chronology of this car with some accuracy. The Corvette is a convenient example, but the same exercise could be applied to iPods, Coca-Cola bottles, suits, or any other object that changes over time.

Plan of the excavation at Willendorf I in 1908 with the position of the figurine.

The second way scholars date the Venus of Willendorf is through an analysis of where it was found. Generally, the deeper an object is recovered from the earth, the longer that object has been buried. Imagine a penny jar that has had coins added to it for hundreds of years. It is a good bet that the coins at the bottom of that jar are the oldest whereas those at the top are the newest. The same applies to Paleolithic objects. Because of the depth at which these objects are found, we can infer that they are very old indeed.

What did it mean?

In the absence of writing, art historians rely on the objects themselves to learn about ancient peoples. The form of the Venus of Willendorf—that is, what it looks like—may very well inform what it originally meant. The most conspicuous elements of her anatomy are those that deal with the process of reproduction and child rearing. The artist took particular care to emphasize her breasts, which some scholars suggest indicates that she is able to nurse a child. The artist also brought deliberate attention to her pubic region. Traces of a pigment—red ochre—can still be seen on parts of the figurine. 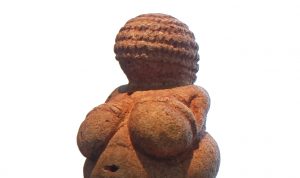 In contrast, the sculptor placed scant attention on the non-reproductive parts of her body. This is particularly noticeable in the figure’s limbs, where there is little emphasis placed on musculature or anatomical accuracy. We may infer from the small size of her feet that she was not meant to be free standing, and was either meant to be carried or placed lying down. The artist carved the figure’s upper arms along her upper torso, and her lower arms are only barely visible resting upon the top of her breasts. As enigmatic as the lack of attention to her limbs is, the absence of attention to the face is even more striking. No eyes, nose, ears, or mouth remain visible. Instead, our attention is drawn to seven horizontal bands that wrap in concentric circles from the crown of her head. Some scholars have suggested her head is obscured by a knit cap pulled downward, others suggest that these forms may represent braided or beaded hair and that her face, perhaps once painted, is angled downward.

If the face was purposefully obscured, the Paleolithic sculptor may have created, not a portrait of a particular person, but rather a representation of the reproductive and child rearing aspects of a woman. In combination with the emphasis on the breasts and pubic area, it seems likely that the Venus of Willendorf had a function that related to fertility.

Without doubt, we can learn much more from the Venus of Willendorf than its diminutive size might at first suggest. We learn about relative dating and stratification. We learn that these nomadic people living almost 25,000 years ago cared about making objects beautiful. And we can learn that these Paleolithic people had an awareness of the importance of the women.

The Venus of Willendorf is only one example dozens of paleolithic figures we believe may have been associated with fertility. Nevertheless, it retains a place of prominence within the history of human art.