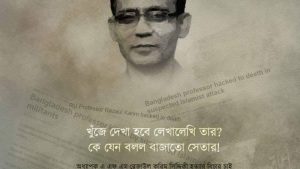 “What he wrote will be investigated. But someone said he only played sitar.” We Want Justice for Professor AFM Rezaul Karim Siddique. Poster: Facebook

Rezaul Karim Siddique, 58, an English professor at Rajshahi University, was found hacked to death near his home on Saturday, April 23 in Rajshahi, a northern district of Bangladesh. His death is the second targeted killing purportedly at the hands of Islamist militants this month.

Siddique was waiting for a bus to take him to campus when two or three people attacked him from behind and stabbed him in the neck. He died at the scene.

Online portal At Tamkin, which is aligned with the Amak news agency belonging to militant organization ISIS, claimed that a group called Dawatul Islam carried out the attack because Siddique “used to call people to embrace atheism.”

Bangladeshi Islamist militants have been blamed for a number of murders of secular bloggers and online activists since 2013, including the most recent killing of secular activist Nazimuddin Samad in Dhaka.

Siddique is the fourth university professor to be murdered at Rajshahi University within the last 12 years. He was a writer, sitar player and was involved with several cultural organisations. He lead a cultural group called Komol Gandhar and edited a biannual literary magazine. He also set up a music school at Bagmara, a former bastion of an outlawed Islamist group called Jama’atul Mujahideen Bangladesh Mujahideen Bangladesh (JMB).

The danger of free-thinking in Bangladesh

Siddique joins the growing list of intellectuals, bloggers and foreigners who have lost their lives in similar killings, using sharp weapons and targeting the head or neck.

According to police, in each of these attacks unidentified assailants hacked the victim to death with machetes or cleavers. Al Qaeda in the Indian Subcontinent reportedly claimed responsibility for the the murder of the bloggers, and ISIS said it was behind the killings of the two foreigners, Italian aid worker Cesare Tavella and Japanese national Kunio Hoshi. Bangladeshi security officials, however, claim that local Islamist groups were behind the murders and that messages from ISIS and Al Qaeda were meant to cover the trail and confuse investigations.

The response of the government to the recent murders leaves much to be desired. As a non-religious parliamentary democracy, Bangladesh has no Sharia or blasphemy law, and anyone who identifies as atheist has the same rights as other citizens in the Muslim-majority country. Under the country’s penal code, though, a person with “deliberate” or “malicious” intention of “hurting religious sentiments” can be prosecuted.

Addressing the murder of law student Nazimuddin Samad earlier in April, Home Minister Asaduzzaman Khan scolded the victims in an interview with US news channel CNN: “The bloggers, they should control their writing. Our country is a secular state. … I want to say that people should be careful not to hurt anyone by writing anything — hurt any religion, any people’s beliefs, any religious leaders.”

And on the eve of Bengali New Year, Bangladeshi Prime Minister Sheikh Hasina stated that it is not at all acceptable to write something hurting religious sentiments of others.

Police have only arrested some individuals, including members of a banned group called the Ansarullah Bangla Team, for involvement in a few of these murders. In December 2015, two people were convicted and sentenced to death for the 2013 killing of blogger Ahmed Rajib Haider. Haider was hacked to death on the street at the height of the Shahbag Square protests demanding the death penalty for war crimes committed during Bangladesh’s liberation from Pakistan in 1971.

But no one else has been prosecuted for the killings of six other men, all of whom were targeted for their secular thinking.

As per the latest reports, police have arrested a student relating to the killing of Professor Siddique.

‘Why did they murder him so brutally?’

These killings have sparked outrage at home and abroad, with international rights groups demanding that the government bring the assailants to justice, and to protect freedom of speech and the safety of people of all sects within the country.

Atheist bloggers are not around, all left the country, or hiding. So islamists killing secular progressive people. https://t.co/611jn1AhD6

Translation:  Will the home minister say this time that we have to investigate what the professor wrote as he edited a literary magazine titled “Komol Gandhar”?

One of Siddique’s former students and Editorial Assistant at Poriborton, Mojaffor Hossain, speculated in a Facebook note why Siddique was targeted:

He did not have any blog or Facebook account. He wrote a few poems, short stories and movie reviews. They were not published in reputed newspapers nor were they writings containing religious hatred. His writings had social meaning. Others were written about classic films like Citizen Kane, Bicycle Thief, Pather Panchali, Chokher Bali, Meghe Dhaka Tara, Amrita Kumbher Sandhane and Schindler’s List. Then why did they murder him so brutally? I, at least, do not know the answer.

Largely, Rezaul Karim Siddique had two issues, which are identified as “problems” in our society.
One, he would not compromise with wrongdoing.
Two, he was a very cultural person. 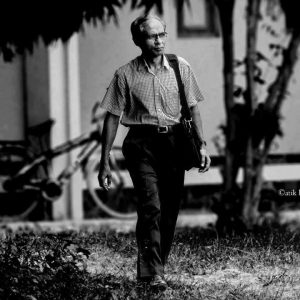 A boycott of classes has been called by the Rajshahi University Teachers Association over the killing:

Translation:  Students of Rajshahi University carried out a protest march condemning the killing of an RU professor.

On Facebook, writer Nazrul Islam blasted the timidity of some in condemning Siddique’s murder: