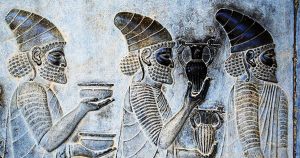 Detail of a relief of the eastern stairs of the Apadana at Persepolis (Takht-e Jamshid), Iran / Photo by Phillip Maiwald, Wikimedia Commons

No one knows exactly when alcohol first entered the human diet—chances are it was a serendipitous prehistoric stumble on fermented fruit—but clearly we took to it like ducks to water. 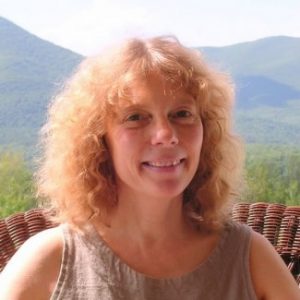 Excavations of the Neolithic settlement Skara Brae in the Orkney Islands turned up 30-gallon pottery jars, the dregs of which—analyzed—turned out to contain an alcoholic brew made from barley and oats, flavored with meadowsweet and topped off with a hallucinogenic handful of deadly nightshade, henbane, and hemlock. The ancient Egyptians made beer and wine. Financial records show that the thirsty builders of the Giza pyramids had a beer ration of over a gallon a day; and Tutankhamun’s tomb held 26 wine jars with vintages (both red and white) from fifteen different vintners.

The ancient Chinese made wine from rice and grapes; the Mayans made pulque from fermented corn; the Celts got tipsy on mead; and the Mongols drank kumis from fermented mare’s milk. Wine, for the ancient Greeks, was a pillar of civilization, to the point where Greek teetotalers were viewed with suspicion. Water-drinking, the Greeks believed, made people surly, curmudgeonly, and over-earnest. Wine-drinkers, in contrast, were convivial, creative, passionate, and fond of intellectual discourse. The original Greek symposium—nowadays a staid, scholarly affair—was once a drinking party.

The drinking party, in one form or another, has been around for thousands of years—and from its inception, has had the potential to spiral wildly out of control. Wine, at Greek symposia, was served in a krater—a large central urn, the equivalent of a modern punch bowl, from which guests filled their cups. The Greek poet and statesman Eubulus, writing in the 4th century BCE, states that after three kraters of wine, the wise guests go home. Subsequent kraters lead to nothing but trouble: the fifth, he writes, leads to yelling, the sixth “to prancing about, and the seventh to black eyes. The eighth brings the police, the ninth vomiting, the tenth insanity and hurling the furniture.”

Excess alcohol consumption was often, rather than an inadvertent drinking-party by-product, a deliberate aim. Early medieval Anglo-Saxon bashes featured round-bottomed drinking glasses, designed to be emptied, since they could not be set down. Guests drained their cups and then turned them upside-down on the table. (Such cups were called tumblers; now, in a quirky historical turn-around, tumbler is a synonym for a drinking glass with a flat un-tippable bottom.) In the 18th century, the rowdy Prince Regent (later King George IV) instituted the practice of snapping the stems off wine glasses at parties, to ensure that his guests always drank the whole thing.

Being able to hold one’s liquor has traditionally been a sign of macho prowess—though attempting to do so has led a lot of people disastrously astray. Among them just may have been James Bond, whose steady consumption of martinis (shaken, not stirred)—according to a 2013 study by Graham Johnson and colleagues in the British Medical Journal—should by all rights have put him in serious trouble.

The now-respectable custom of the toast was once an exercise in aggressively competitive drinking. Historians guess that the toast most likely originated with the Greek libation, the custom of pouring out a portion of one’s drink in honor of the gods. From there, it was an easy step to offering a drink in honor of one’s companions.

A Toast to Toasting

Sometimes toasting was a duty—in the first century BCE, the Roman Senate decreed that the health of the Emperor Augustus be drunk at every meal—though more often it smacked of a drinking game. The poet Martial, who wrote snarky verses in the first century CE, described a Roman party practice in which each guest was compelled to drink as many glasses of wine as there were letters in his mistress’s name-a major challenge for those involved with a Proserpina or Messalina.

According to Geoffrey of Monmouth in his 12th-century History of the Kings of Britain, the first recorded toast in England took place in 450 CE, at a feast given in honor of British King Vortigern by Hengist, leader of his Saxon allies. Hengist’s daughter Renwein (Rowena) offered a goblet of wine to the king, saying “Louerd King, waes hael!”—“Good health!”—after which both drank. (Vortigern, swept off his feet, promptly proposed marriage.)

The holiday wassail bowl takes its name from the Saxon waes hael toast; traditionally this was a large single bowl from which everyone shared a drink. Related is the tradition of the loving cup, in which a large two-handled cup is passed from diner to diner, with each in turn taking a drink. Traditionally guests stand up three at a time as their turn arrives: one person to pass the cup, one to drink, and one to defend the temporarily defenseless drinker. The story goes that this tradition arose in the 10th century, when King Edward II (“the Martyr”) was stabbed to death by his stepmother while drinking a cup of mead.

The term “toast”—as in drinking to someone’s health—comes from a literal piece of spiced or charred toast, a tidbit once routinely dropped in a cup or bowl of wine, either as form of h’or d’oeuvre or to make the wine taste better. Shakespeare mentions this in The Merry Wives of Windsor, in which Falstaff calls for a quart of spiced wine, then adds “Put a toast in it.” By the 18th century, the term “toast” had been transferred from the floating bread to the person honored by the toast-hence the particularly popular could become the “toast of the town.”

Toasting in previous centuries, though governed by a complex hierarchical etiquette of who could toast whom and when, was largely an excuse for excessive drinking. At get-togethers, bumpers—bulging full glasses—of wine were raised to the king, to each and every guest, and to lists of absent friends. The British navy had a roster of toasts to be drunk daily, in order: the first was always to the king, variously followed by “our ships at sea,” “our men,” “a willing foe and sea room,” and “sweethearts and wives.” The irrepressible Prince Regent—he of the snapped-off wine-glass stems—favored competitive toasting in which gentlemen, in pairs, drank bumpers to admired ladies until one or the other of the drinkers collapsed senseless to the floor.

For many, it was too much. The first temperance society, the Order of Temperance, established in Germany in 1517, was dedicated to abolishing toasts. Louis XIV banned toasting at his court; and puritanical Massachusetts, in 1634, banned the “abominable” custom of drinking to another’s health. Most rabid of anti-toasters was Puritan lawyer and polemicist William Prynne who, in 1628, wrote an entire book devoted to the subject titled Health’s Sicknesse. In it, he thunders that “this drinking and quaffing of healthes had it origin and birth from Pagans, heathens, and infidels, yea, from the very Deuill himself.” Samuel Pepys, who attended a dinner with Prynne on June 6, 1664, reports that he refused to drink to anyone’s health (“no, not the King’s”), but “sat down with his hat on all the time,” presumably glaring at the company.

Others, in lieu of eliminating toasts altogether, opted for refurbishing their tarnished image. One of the earliest (pro) books on toasting, published by J. Roach in 1791, was titled The Royal Toast Master: Containing Many Thousands of the Best Toasts Old and New, to Give Brilliancy to Mirth and Make the Joys of the Glass Supremely Agreeable. : Also The Seaman’s Bottle Companion, Being a Selection of Exquisite Modern Sea Songs. The toast, wrote Roach, is “well-known to all ranks, as a stimulative to hilarity, and an incentive to innocent mirth, to loyal truth, to pure morality and to mutual affection.” He proposed that toasts be drunk to such uplifting sentiments as “Confusion to the minions of vice!” and “May reason be the pilot when passion blows the gale!”

Eventually, in polite society, one no longer had to guzzle an entire wine glass for each proposed toast; a sip was considered plenty, and often it sufficed simply to catch the toastee’s eye. Toasting, advised a mid-19th-century etiquette manual, should be done “quietly and unobtrusively;” the honored lady should “catch the person’s eye and bow with politeness,” then “smile with an air of great kindness.” In Casablanca, Humphrey Bogart’s best and last toast to Ingrid Bergman—“Here’s looking at you, kid”—was a matter of eye contact, with not a glass of wine in sight.

Americans have a special tie to toasting. In 1778, John Stafford Smith published a musical composition in a London magazine titled “To Anacreon in Heaven,” after Anacreon, a Greek poet known for his poems in praise of love and wine. The Anacreon Society, a contemporary gentleman’s club dedicated to “wit, harmony, and the god of wine,” enthusiastically adopted it, opening each meeting with a rendition of the song as a musical toast. The melody soon became so popular that it was co-opted for any number of popular songs.

Among these, on our side of the Atlantic, was “The Star-Spangled Banner.”