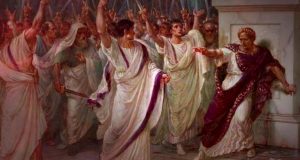 Dissatisfied Republicans rebelled, but the empire was born.

Gaius Julius Caesar (13 July 100 BC – 15 March 44 BC) was a great statesman who changed history and left a great legacy. He was descended from the ancient and noble patrician family of Julius. Despite the noble origin, the family of Caesar has traditionally been linked to opponents of the Roman Senate. In 84 BC, Caesar married Cornelia.

In 82 BC, Rome was conquered by the troops of Lucia Cornelia Sulla, who became a dictator. First, he abolished all the laws adopted by Gaius Marius. Their supporters were punished. Caesar was required to divorce his wife Cornelia, but Caesar did not comply with Sulla’s order. Caesar decided to escape from Rome. On the road, Caesar was very ill and was on the verge of death, then he decided to return to Rome, where Aurelius Cotta begged pardon for his son. 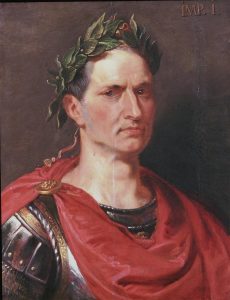 Subsequently, Julius Caesar had to leave Rome and go to Asia Minor, where he served in military service. After the death of Sulla in 78 BC, Caesar returned to Rome and joined the political struggle. He became popular as one of the best speakers in Rome. He quickly gained power and influence.

The three prominent politicians of Rome – Pompey, Crassus, and Julius Caesar, formed the First Triumvirate. It was an alliance against the Senate. Triumvirs shared their leadership and power over the provinces and agreed to support each other.

Julius Caesar organized a military campaign to Gaul (the territory of modern France). In the Gallic War (58-50 BC), a vast territory was annexed to Rome. Caesar even crossed to the British Isles. The conquered lands became part of the Roman state as the province of Gaul.

After the death of Crassus in 53 BC, Pompey actually became the only ruler of the state. Political anarchy in Rome suggested to the Senate the need for a strong ruler. Pompey thought the Senate was a better ally than Caesar. In 52 BC, Pompey was elected as Consul for the first time in Roman history, without a colleague.

In 50 BC, Pompey, frightened by the successes of Caesar in Gaul, began to influence the Senate to withdraw Caesar from the conquered lands. On January 1, 49 BC, the Senate had adopted the order. People’s tribunes did not agree with this decision and reported it to Caesar. Caesar had only two legions. Being near the border of Italy, he understood that by crossing the river Rubicon, he would begin a civil war. He crossed the river. Pompey retreated to Greece. In 48 BC, the battle between two prominent Roman generals took place. Caesar defeated Pompey. Then Pompey went to Egypt, seeking allies against Caesar. The young Egyptian king Ptolemy XIV decided not to help Pompeii and killed him. 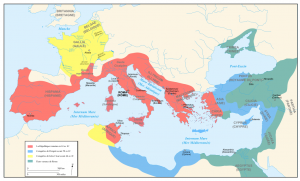 Caesar moved to Asia Minor, and then to Alexandria. In Egypt, he stayed for half a year to receive the money that one of the previous kings had pledged to pay to Rome. Then the Egyptian royal family began a campaign of power. The young Ptolemy XIV clashed with his elder sister, Cleopatra. Caesar was on the side of the latter, but the Egyptian people rebelled. Caesar had already had a close relationship with Cleopatra, and even wanted to take her for a wife. Together with Cleopatra, he traveled to Egypt, and then, in 46 BC, she visited Caesar in Rome. The son of Cleopatra and Caesar took the name of Caesarion.

Caesar was proclaimed dictator for 10 years. The main goal of Caesar’s policy was to restore a stable life for the state. He issued a number of laws on the arrangement of cities in the provinces, on the free distribution of bread, as well as the law against luxury, which prohibited the use of knives, wearing purple clothing and pearls. Caesar unlimitedly enjoyed his power. His orders were considered legal acts, and newly elected officials took an oath to his will. Caesar changed the makeup of the Roman government. He changed the Senate. The number of members of the Senate increased to 900. In the Senate, he took the first position and the first word, so he immediately gave a tone to the meetings. The Senate lost all state initiative and only took note of what the omnipotent dictator decided.

Caesar tried to change the social structure of Rome. Not afraid of unpopularity, he reduced subsidies to the impoverished population of Rome. Caesar also began a broad colonization of Italy. He bought many lands and settled on them the veterans of his armies and landless peasants. New settlers were housed in old homes throughout the country, for quicker assimilation with the local peasantry. To support the rural population of Italy, Caesar issued an order according to which, in private estates, at least half of the workers should be free peasants, not slaves. Caesar also took care of the population of the Italian cities; and issued new municipal laws that regulated the urban structure.

New colonies were also created in the provinces of Gaul, Spain, Africa, Greece and the East. During his reign, about one hundred thousand people were displaced in the province. This colonization had a dual purpose: to raise the economic situation of the peasantry, which in overpopulated Italy could not make a living, and to strengthen the Romanization of the provinces. This policy was followed by all the Roman emperors. He was generously distributing Roman citizenship to the inhabitants of the provinces, in such a way to tie them more closely to the Roman state.

Caesar began a major construction in Rome. He built a new forum (market) that got his name. In addition to architectural work, Caesar planned to establish a new port in Ostia, at the mouth of the Tiber, building new roads in Italy and the provinces. Caesar thought about building in the provinces, and the establishment of new cities, even the founding of the second capital of the state in the East. He wanted the borders of Rome to move beyond the Danube, conquering the Germans, the Scythians, and other tribes.

In 45 BC, a calendar reform was carried out. Caesar, who personally was interested in astronomy, decided to introduce a more detailed calendar in the republic. The normal year would be 365 days, and every four years there would have a year of 366 days. This calendar, in honor of Julius Caesar, was named Julian. We used it until 1918. But even now, the Julian calendar is not forgotten. Caesar was not only a general but also one of the best Roman writers.

Dissatisfied Republicans rebelled. Caesar has killed on March 15, 44 BC, at a Senate meeting. The assassination of Caesar renewed the civil war in ancient Rome; causing the beginning of the decline of the Roman Republic and the birth of the Roman Empire, which was headed by Caesar’s adopted son, Octavian August.